Man, this has been a long off-season.  The #3 pick in the draft, Carlos Boozer re-signing, the return of the Revue, the World Championships, Korver coming back, the BIG trade.  It just feels right to get basketball going again tonight.

This has been a no-defense series to date.  The Jazz and Nuggets are the league playoff leaders in point per game and #2 and #3 in points per 100 possessions.

So is that going to change tonight?  Not likely.  There will be adjustments to try to slow down Carmelo and Deron but these first two games have been a continuation of the season series.  The average scores of those four games were 111 for Denver and 107 for Utah.

They're also the highest-paced series so far so we're likely going to see another high-scoring game tonight.

George said we can't let him hurt us, we have to take the ball out of his hands if he comes down on the left side of the court, we can't have three guys hugging someone on the right side.

We have to tilt the floor towards him - make someone else be the one to score 30 points.

One of the ways they've tried to do that is to trap Deron to which he replies,

Let them trap me.  That means they're taking one of their guys off of one of our guys, so we have an advantage. Most of the time, I'm going to find the open man, so that's great.

When you combine that with this article from TrueHoop yesterday, you might be able to slow Deron down but someone else is going to make it up,

C.J. Miles, "We’re making basketball plays -- plays made off screens or made off cuts. Maybe this time it’s not a back door cut this way. Or, if I set the screen, then the play should work because if they overplay the screen, there’s something that’s going to happen as a consequence to every reaction. If you trail Kyle Korver off a screen, then he’s going to make the shot. If you shoot the gap, then you throw the ball into the post. There’s always something that can be done off whatever the defense counters with."

That's why the Jazz have been able to get a split in this series so far and that's because others are stepping up.  If they're taking it out of Deron's hands then it's up to everyone else to contribute.  So far, so good as Deron is still putting up huge numbers despite getting trapped.

Thanks to memoismoney for this,

There have been quite a few earthquakes lately so I thought I'd just give everyone an advanced warning.  There will be an earthquake-like tremor starting at about 8:30 tonight and will last for about 3 hours.  I've created a map to show those affected so you won't be alarmed. 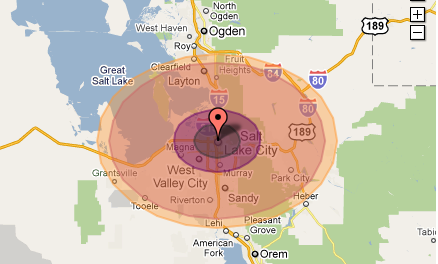 Those in the purple areas should secure pictures and valuables and cover their windows in plywood.  Those in the reddish-orange area