The Jazz are right there with the Suns for the best offensive rating (points per 100 possessions) in the playoffs so far.  They're sitting at 117.5 while Phoenix scores 117.6.  They're also out front by a bit in points per game at 112.3.

On defense they're still giving up 114 points per 100 and 109 points per game overall.  You'd like to see those numbers come down but Denver is still an efficient scoring team though they're not shooting the ball well over the past 3 games.  They're still getting to the line and getting some threes in there.  We didn't expect either team to be able to stop each other much so this isn't totally surprising.  It's going to be a shootout  until the end.

Should the Jazz advance to the second round, they could be the beneficiaries of some rest as it looks like OKC and LA will probably go 7 games.  That gives AK time to get worked back in and get some practices before being thrust into a game.

OKC is taking it to LA right now and had a couple of legitimate shots at stealing a game in LA in  games 1 or 2.  I really do think they're dangerous because they play seemingly without a care in the world.  They're just playing ball and not getting caught up with the bright lights and big names of LA.  They're kind of punks when you think of it in that regard.  Just a bunch of punk kids with no respect for their elders.  They're making it look like playoff experience is vastly overrated.

They may still go down in this series but it's going to be because LA picks things up and beats them not because the Thunder are intimidated in any fashion.

It was quotes galore last night with Fesenko.  Deron said, "I heard he said he was peeing in his pants" when asked about Fess' two free throws.

Fess on checking back in when Millsap fouled out,

I was scared, really, but after a couple pushes like from Nene, after a couple hits from Kenyon Martin, I was like, ‘OK, let's do this. Let's play the basketball.

And Carmelo's quote summed things up, "Fesenko, Fesenko."  His tone tells his frustration.  How in the world is Kyrylo Fesenko taking it to us?

This is why we love Ronnie Price,

I saw someone suggest this on twitter (I believe) last night.  Do you think it's accurate? 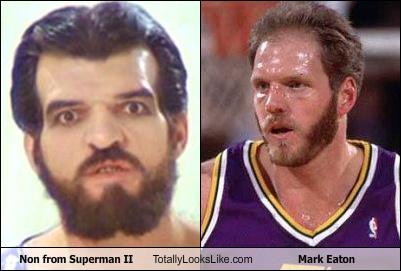