Who Matters Most on the Jazz Right Now?- More numbers than you want to know about

Share All sharing options for: Who Matters Most on the Jazz Right Now?- More numbers than you want to know about 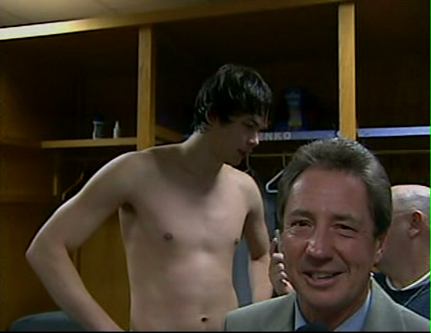 This guy is really important to our playoff run.  Not Steve Brown, but the guy with his shirt off.

Let me just warn you right now.  I am delving a little bit into some numbers.

I will try my best to make this readable.  I was just wondering if some of my observations about the Jazz compared with the statistics if I looked them up.  And mostly I wondered how Kyrylo Fesenko was really impacting the Jazz defense.  I have been a proponent for a long time now that Fesenko would absolutely change our entire defense, his ridiculous foul-rate be damned.  I think I was right.  But before I show you the numbers I crunched, I would like to point out how close the Jazz are to having an absolutely deadly defensive lineup.  Kyrylo Fesenko plugs the middle of the court so effectively and turns teams into jumpshooters.  Wesley Matthews is the best perimeter defender the Jazz have had since the days of Bryon Russell and Shandon Anderson.  And when the Jazz get Andrei Kirilenko back healthy, they can run a lineup of Deron Williams, Matthews, AK, Paul Millsap, and Fesenko and make life very difficult for opponents.  And those guys might all be back next season.  But onto the topic at hand...

I wanted to see how the team's offense and defense were affected with certain players on the floor.  To do this I looked at the +/- stats for all four playoff games.  I know there are a lot of problems with the +/- statistic, but in this case, I actually think it works really well.  In the playoffs, coaches shorten their benches and mostly play their best players.  And you play the same team back to back with similar time between games, so there are fewer variables to distort the +/- stat.  And since almost all 192 minutes of this series have been meaningful, the numbers are not "trash-time" numbers.  Jeffers, Koufos, and Gaines have played only a combined 16 minutes in the series.

So here is how it works.  Let's take Kyrylo Fesenko, the guy I was most interested in, as an example.  There have been 192 total minutes of gametime in this series.  The Jazz have scored 449 points and the Nuggets have scored 436.  Fesenko has played 78 minutes.  While he has played the Nuggets have scored 162 points, or 2.08 points per minute.  In the 114 minutes that Fesenko has been on the bench, the Nuggets have scored 274 points or 2.4 points per minute.  So in my ruling, Fesenko gets a -0.32 points per minute rating (difference between the two numbers).  So defensively a negative number is a good thing.  To make it practical, in the 28 minutes that Fesenko is on the bench, the Jazz give up 9 more points than if Fesenko were on the floor.  That's huge.  Can any Jazz player top that?  Here are some other defensive "scores" for the other Jazz players that get "significant" minutes.  Okur's 11 minutes won't be counted (his defensive score was a gastly +0.6) and neither will the 16 minutes from Sundiothus Koufers.

Fesenko has BY FAR the biggest impact of all the players on the defensive end.  Not too surprised, but I was surprised.

Look at Carlos Boozer's number.  If I were reading my stuff, I would accuse me of looking for stats to show what little influence Boozer has on the defensive end.  But I didn't seek it out.  I was curious as to what I would find.  But the Jazz are much better at defense when Boozer sits.  In this case he is the Anti-Fesenko.  Which should be his new nickname.

I wonder what AK's numbers would be if he were healthy in this series?  My guess: he would be in 2nd place.

Still think we don't lose anything offensively, when Deron Williams goes out of the game?

And CJ.  Really?  He kills our offense in this series.  I was surprised to see that.

Also surprised to see that Matthews and Fesenko help the offense so much.  but then again, that is why they are first and third in overall +/- for the series.

I'm going to keep track of these numbers throughout the playoffs to see if they remain consistent, but my hypothesis is that they will.  Fesenko is the key to our defense and Deron is the key to our offense.  I don't know what Jazz fan would argue with that.