Two quotes from this article kind of exemplifies why Matthews was able to crack the starting lineup for a Sloan team,

"It's just playing [the]basketball," said Matthews. "I've played this game for a long time and when you've got confidence from your teammates and coaching staff to go out there and play, that kind of stuff happens."

"I didn't really know that rookies didn't play too much, that was kind of news to me, but I'm glad that I'm getting that opportunity."

Mentally, he's one of the strongest rookies players I've seen.

Nice in glorious gifness, the Ronnie Price block from the last game.  And here's another #BoomBitches gif.

It looks like the gr8ness tees are picking up steam.  Siler has an article on it.  Here's the facebook page.  And here's DWill in his, 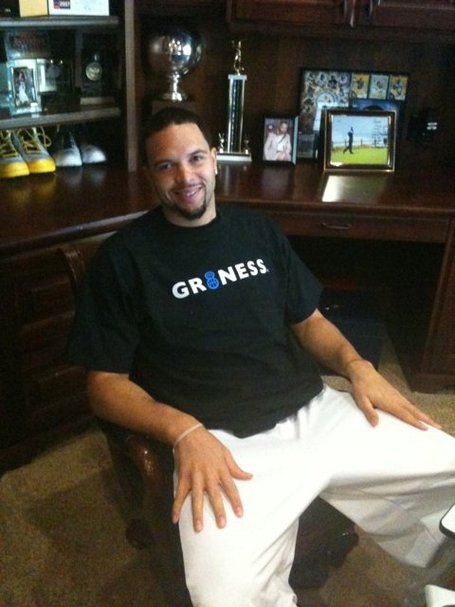 Just when you thought they were close to going down in flames, the Lakers go out and pound the Thunder last night, 111-87.  I still think that the Thunder will win game 6 back at home but you can see what they can do.

Their win though just reinforced to me that our series isn't over.  The Jazz are up big right now but tonight I'm assuming we'll see the best of  the Nuggets.  They have the ability to blow people out of the building.  Let's hope that they don't remember this.

DJ and PK had a discussion yesterday on whether you want to play the Lakers or the Thunder in the next round.  PK's argument was that you want the Lakers because you want to beat the best and wipe Phil's smugness off his face.

While that would be sweet, I value having the best chance to win more and playing OKC with home-court gives us that.  Somehow it cheapens wins if you'r not playing the best team?  Everyone gives the Jazz crap for making the WCF in 2007 only because they played the Warriors instead of the Mavericks.  BS.  Do you think that the Spurs or their fans feel less about their championship that year because they played the Jazz instead of the Mavs?

Winning is what's important and you take whatever gives you the best chance to accomplish that.  If the Thunder were to advance, maybe the Jazz should just forfeit the series because a win over them just wouldn't be the same?

I know that they have to take opposing viewpoints on the radio for the sake of discussion but saying you don't want to play the Thunder is lame.