It sounds like AK is still a ways from returning.  According to Spears at  Yahoo!, he's going to practice either Sunday or Monday.  So that likely would put him out for the Nuggets series.

We'll need his length against either team that we might play.

One other note on Deron, he's the first NBA player to start the playoffs with 5 straight 20 & 10 games (via Rotoworld).  gr8ness.  Do I sound like a LeBron or Kobe fan yet? 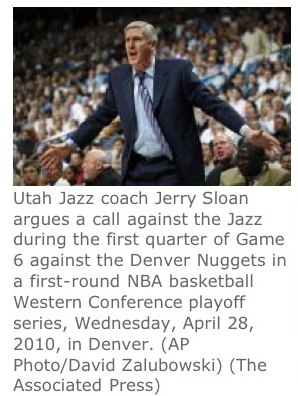 I knew this series was rigged.

You've likely seen this story already, but how great would it have been to have seen Jerry Sloan kick the crap out of Chris Webber?  This was in the playoffs and no doubt would have earned Sloan a suspension and possibly getting let go by the Jazz.

Also, how dumb is Webber?  Jerry Sloan is the man you want to call out?  Sloan was tough enough back in the day.  Has Webber never heard of old man strength?  You can't beat old guys in arm-wrestling, fist fights, or wrestling.  The younger you are, the harder you fall.  So take Jerry's toughness in his early years and multiply that by 100 and that will tell you how strong he is now.

I would like to think that they took care of business after that game somewhere out behind the stadium and that was that.

Also, someone needs to remix the Fresh Prince's "I though I could beat Mike Tyson" with Webber singing, "I don't know why I thought I could beat Coach Sloan."

So what does everyone think about Harping the announcer?  I know not everyone gets FSN to hear him with Boler and Booner but he has done some studio work and a bit of NBA.tv.  For those that have heard him, yeah, nay, or meh?