Game 5 is over, but the battle for the series is not

Share All sharing options for: Game 5 is over, but the battle for the series is not

I thought that last night would have been a good chance to see what this Jazz team was made up of. Unfortunately for us, what we saw was a Utah Jazz team more likely to rely on a good home court record, than the new and improved Utah Jazz team that can win on the road against strong teams -- and was developing a killer instinct.

I'm not going to mince words here. If the media can somehow spin this series to "woe is us, Nuggets supporters", "Utah getting to the line too much" and "our NBA commercials demand the nuggets advance" -- to the crazy point that an old school coach who is always over-looked for personal accolades who brings a team of gritty, scrappy players to the playoffs (only to play without two starters) and have to rely on untested youth and start an undrafted rookie as the "bad guys" then we should have won last night. It was a great missed opportunity, the Jazz were leading the Denver Nuggets at halftime, and they were playing without their starting center (somewhat bringing the talent level more to equal than it had been so far this series).

In my mind Utah blew it last night. If we can't beat the Nuggets twice on their home court in the playoffs without our best defender and best outside shooter then we haven't improved. We're the same old Jazz team that's just good enough to get killed in the playoffs. That said, let's look a little deeper into last game, and look forward to game 6 as well...

Historically, when up 3-1 the Utah Jazz have been 4-4 in Game 5's -- including last night's loss. More often than not, though, the Home team wins Game 5. (To the point that it's usually a blowout, according to some observers) Last night the Milwaukee Bucks went into Atlanta and won on the road. The Jazz did not. Denver made some massive adjustments -- none bigger than actually playing like a team, instead of a loose collective of one-on-one players. Their passing in the first half and unselfishness throughout the game were sights for sore eyes for veteran bloggers, some who could not hide their bias. Hats off to Adrian Dantley on this win. The Nuggets made the right adjustments to stay alive and they made their shots when the Jazz did not make theirs.

Moving on, what are some of the most important issues that have developed from this game?

Utah continued to play physical ball, but were not rewarded with trips to the line. This was a large part of the pro-Nuggets media campaign, and the tactics of the big money boys paid off handsomely. Denver - who played just as aggressive and physical as the Jazz (Utah didn't lose this game by falling in love with outside jumpers, they still pounded it in the paint late in the 4th quarter) - ended up going to the line 17 more times. A quick look at the box score reveals that the Jazz only fouled the Nuggets one more time. Hmmm. This isn't the same Utah team that has relied on fouling in place of defense as the last few seasons though. So is this a case of just having to "give" this game to the Nuggets, for old times' sake? Pathetic.

Utah will have to reverse this trend quickly as the Jazz do not have enough people to deal with getting into foul trouble and still stay in the game. Playing at home, I really hope, that the refs will be similarly provincialistic in their whistle blowing. And yeah, we got screwed last night by a bunch of guys who didn't want to let Paul go to the line while being raped in the paint by the Nuggets. The best thing about that officiating crew? There's no way that they are going to be reffing the close out game in Utah on Friday.

Melo asked for help in the post game interview at the end of Game 4 - and he got it from outside their talented core of him, Billups and Martin. Deron, Carlos and Millsap need help as well if the Jazz are going to win game 6. Denver had nearly 40 points off the bench in the last game. For the Jazz, only one player off the bench even scored. Utah is quite thin when it comes to bench depth right now. This can't be an excuse now because the Jazz won 3 games with this lack of depth early in this series - they can win another one with only these guys too. The quality of play that we saw from the Jazz 'helpers" between the first 4 games and game 5 is something to marvel at though. 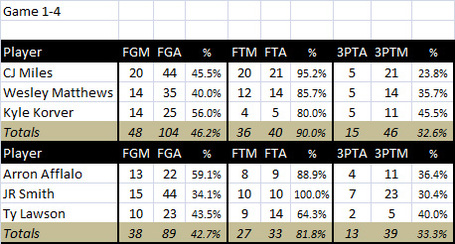 Looks pretty even huh? Our guys getting to the line more, and shooting better from fg% and keeping the defense honest from deep. No wonder the Jazz were up 3-1 after 4 games, right? Now look at game 5: 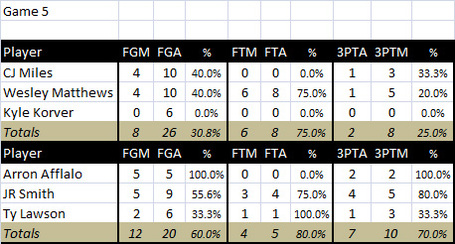 Big difference, huh? Yeah, not much needs to be said here, 'cept that Denver won last game because of the massive difference in how their non-Star swings played compared to ours. 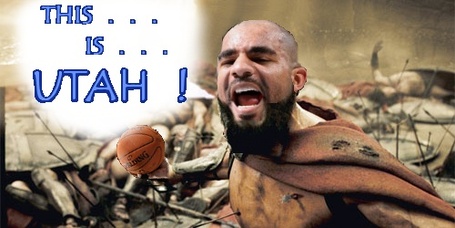 If the Jazz are mired with the stigma of a) being a bad road team, and b) a team that fouls a lot -- let's not stop the stereotype train there. Let's not forget that the Jazz are also c) unstoppable at home, and d) usually benefit from some shady ref decisions. If these two situations don't play out then you know that the series is not being called evenly. (You can't hurt the Jazz for their faults on the road without rewarding them for their qualities at home)

Outside of calls and fouls, our role players do play better at home -- and the Denver Nuggets are the worst road team out of all Western Conference playoff teams. That said, the Jazz players can't count on this next game as a sure thing; otherwise they have learned nothing from the last few seasons - let alone anything from 1994 when the Denver Nuggets won 3 games in a row against the Jazz in the playoffs. [Yes, the Jazz did end up winning that series, but they had home court. We don't this time around.]