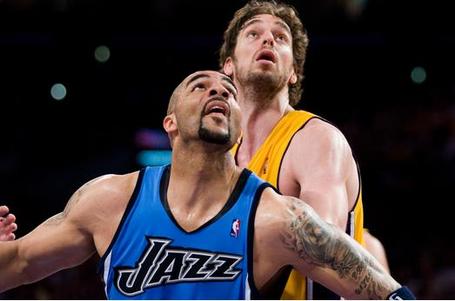 I was disappointed that the Jazz lost to the Lakers.  But more than the loss itself, I was disappointed with the way the Jazz lost.  They lost exactly the same way that they always lose to the Lakers in LA.  It was like watching the movie Groundhog Day.  The Lakers got out to a huge first quarter lead and the Jazz (mostly Deron Williams) made a valiant effort to come back, but everyone knew the comeback would come up short.  You just can't spot the defending champs 20 points on the road and expect to win.  And the reason, again, that the Lakers got out to such a quick start was due to the fact that Carlos Boozer and Mehmet Okur were outplayed, outclassed, out everythinged by Pau Gasol and Lamar Odom.

I stumbled upon this piece by foxsports.com's Charley Rosen.  For the record, I am not a Rosen supporter.  In general I read his work and I either wholeheartedly disagree, or I think, "that taught me nothing about basketball."  But this piece was spot on.  I agreed with about 98% of it.  Rosen didn't write this piece to make Jazz fans depressed.  He didn't write it because he has a vendetta for any particular Jazzman.  In this case Rosen is calling it like he sees it.  And I am guessing that he has seen the Lakers dismantle the Jazz over the last 3 seasons.  He writes in LA.  Rosen has some harsh things to say about the Jazz frontcourt.  He calls Carlos Boozer and Mehmet Okur slow footed with poor lateral movement.  It isn't a mean statement.  It's the truth.  It is no different than saying Ronnie Brewer can't command a defense to guard his outside jumper.  The Jazz are 0-10 in LA and 5-12 overall against the Evil Empire since the Lakers traded for Pau Gasol.  And the Jazz just can't match up with their bigs.

Kobe isn't the reason the Jazz lose to the Lakers anymore

Two seasons ago in the playoffs, the Jazz couldn't match up with Kobe Bryant.  He was a much more effective player back then and the Jazz didn't have perimeter defenders or shot blockers to stop him.  That playoff series, a series that was much more competitive than any Laker fan will admit, Kobe Bryant shot approximately 37 free throws a game.  And many were deserved.  The Jazz couldn't win while Kobe shot more free throws in a game than the entire Jazz team.  In last year's playoffs, Kobe only took 7.8 free throws a game during the Jazz's playoff series, more than half as many as the year before.  I lied earlier.  Kobe only (only?) shot 16 fts a game in 2008.  So why do the Lakers still dominate the Jazz even though Kobe isn't as dominating?  Because the Lakers have Lamar Odom and Pau Gasol and the Jazz don't.

-If the Jazz want to beat the Lakers in the playoffs, they will have to win a game in LA

-The Jazz haven't won in LA since Pau Gasol joined the Lakers.  And quite honestly, they have only come close once.

-In the 10 games in LA that Gasol has played, both Lamar Odom and Pau Gasol have averaged about 19 points, 10 rebounds on 60% shooting from the field.  Sixty Percent!  Over 10 games!  That's dominating.

- When you have to double opponents, especially in the post, this will lead to open three pointers.

-Charley Rosen was spot on about Boozer and Okur.  They literally can't handle Gasol and Odom.

-Kyrylo Fesenko and Kosta Koufos would help greatly with our size disparities against the Lakers.  They would make mistakes and commit some stupid fouls, but without them, the Jazz can't beat the Lakers in a series.

- Sometime Carlos Boozer puts up respectable numbers, but they have no bearing on the outcome of the game in a positive way.  I call this the Zach Randolph- pre 2010 phenomenon.  This was in full force on Friday night.  And it's important, because if Boozer isn't effective offensively and he is mismatched defensively, then it is a problem.  Same is true with Okur who missed wide open three after wide open three on Friday.  Let me illustrate:

Carlos Boozer finished with 20 points and a monstrous 18 rebounds on a respectable 8-16 from the field. In a fishbowl, it seems like he was effective agains the Lakers.  But he was a large part of the Jazz's problems.  In the first 7 minutes of the game, Carlos Boozer was 1-4 from the field with a turnover.  The score was 22-10 for the Lakers at that point.  Derek Fisher also had 7 points on open shots due to Deron Williams double teaming Gasol.  By the end of the quarter Boozer was 2-7 from the field with 5 points, 5 rebounds and the Jazz were down by 16 and the game was essentially over.  Meanwhile, his counterpart, Gasol had 5 points, 6 rebounds and 4 assists in the opening quarter..while only taking 3 shots.  So while the game mattered, Boozer shot 25 % from the field while his man accounted for 15 points (points and field goals assisted).

When the second half started and the game was reasonable again, Boozer came out and missed 3 of his first 5 shots.  He just kept chucking, but it wasn't finding the net.  Boozer finished with 20 points and 18 rebounds, but he scored his last 7 points and made 3 of his last 4 shots when the Jazz were already down by 17 in the 3rd and 4th quarters.  Can you say stat stuffing?  The loss wasn't his fault, but his final box score is super misleading and he wasn't helping.  Other than his rebounding.  I have always admitted that Boozer is a great rebounder.

Let the jury take notice:  In the 16 minutes when the Jazz were close to the Lakers and the outcome of the game was in doubt, Carlos Boozer went 4-12 from the field and Gasol dished out 9 assists and only took 8 shots, half the amount of Boozer.  You cannot argue, I repeat, you cannot argue that Boozer had a good game on Friday night.  And if you do your homework, you will find that more often than not, this is the case with Boozer against the Lakers.

The remedy you ask?  You can't find a reason not to throw Kyrylo Fesenko at Gasol.  Go ahead and try.  You can't tell me or anyone else that he can't do better than Boozer.  And like I said, if Boozer isn't working offensively, he is killing the Jazz's chances of beating the Lakers.  Especially if he is shooting anyways.

The Jazz are going to get a chance to play the Lakers again this upcoming playoffs, probably.  They can continue to do the same thing and hope that the Lakers miss open three pointers.  But history tells us that it won't work very well.  Here's hoping the Jazz can try something new.  And let's hope they get a shot at the Lakers in the Western Conference Finals.