Karl Malone: as terrifying as time, the destroyer of worlds.

Share All sharing options for: Karl Malone: as terrifying as time, the destroyer of worlds.

[For those interested in the full resolution image, please visit here, and adjust your desktop backgrounds accordingly]

Some may know of the J. Robert Oppenheimer quote that he spoke after the detonation of the first atomic bomb; some may not know these words actually originate from the Hindu scripture known as the Bhagavad-Gita. Not only was that source material used to describe a monumental event in the history of modern atomic science, but the full text can be used to describe Karl Malone's impact on the NBA, Basketball, and the pathetic defensive schemes and opposing power forwards he routinely wrought terror over. Be prepared to file this under the "it's too perfect and true to be fake" files, because the whole "I am death, destroyer of worlds" quote does come from the Bhagavad-Gita, and be sure to take a good look at the book and verse number.

I am terrible time / death, the destroyer of all beings in all worlds, engaged to destroy all beings in this world; of those heroic soldiers presently situated in the opposing army . . . none will be spared.

Did you catch that it was Book 11 (Malone's number in international competition, some All-Star Games and his last season), Verse 32 (the number that he went to war wearing)? The ageless Malone (who played until 40, and is the sole record holder for oldest player to record a triple double) was like time, or death if you were playing against him -- and during his peak was the destroyer or worlds. (Think Amare, but with less frequent dunks, but harder dunks, more rebounds and better defense) Karl Malone is going to the Hall of Fame, officially now, and celebrate with us his glorious Hall of Fame career. More stats, stories and memories after the jump ...

Let's get this out of the way: I would not be a Utah Jazz fan is it wasn't for Karl Malone. When I started to get into the NBA I was living in Los Angeles. Fandom of a team from there traveled with me while I continued to move around the world. That is, until the 1987-1988 NBA Playoffs and the young, upstart Jazz took the Lakers to 7 games (one of the Jazz wins coming on the Lakers home floor) in the second round. Karl Malone destroyed LA in that series, his power, speed, and the sheer audacity of dunking it on Kareem made me a fan. And I was a fan for life if you go by the sheer number of log-in passwords that incorporated the letters m-a-i-l-m-a-n back when I was growing up. 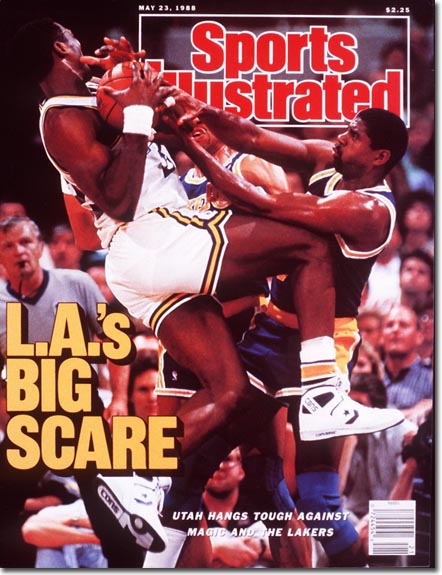 What Vladislav Tretiak was to goal tending in Hockey, and Lawrence Taylor was to line backing in American Football, Karl Malone was to the power forward position in Basketball -- a pure, unadulterated quantum leap in design. This is a guy who not only finished his career as the 2nd All-Time scorer in the sport; 1st in Free Throws attempted and made All-Time; 1st All-Time in defensive rebounds; winner of two MVPs; a 14 time All-Star; 14 All-NBA Teams; 4 All-NBA defensive teams and twice a Gold Medal winner  -- but he's a guy who has played in 1476 of 1526 total regular season games. That's playing in 96.7% of the possible games he could have played over a 19 year career. Look at how often guys like Kenyon Martin, Kevin Garnett, Tim Duncan, Charles Barkley and Amare Stoudemire (not to mention Carlos Boozer) have missed games over their respective careers. They don't even play in 80%, let alone above 95%.

And here's another thing -- the vast majority of games Malone missed were due to suspension from the league and not real injuries at all. In fact, if you remove the last season (the Lakers debacle), then Malone has played in 99.3% of all possible games. (The number ramps up if you include playoff games, which would give him another 193 games played). Malone defeated Father Time and became timeless, himself.

You probably knew that Karl got to the Free Throw line a lot. You probably also knew that he started off shooting 48.1 fg% as a rookie. Of course, he had the drive, desire and discipline to get better at his craft. So much so that he topped off shooting 79.7 ft% that would mark a 156.9% rate improvement.. His dedication to improving his weaknesses greatly thrust him from a pool of 'good' players into the realm of 'great'. What made him Epic was the fact that he went to the line more than 10 times a game in 6 different seasons. He also went to the line 8 times or more per game a grand total of 15 different seasons. For a point of reference, Duncan has never shot 10 or more free throws a game per a season, and his career ft% hovers only percentage points over his Rookie season mark of 66.2%. Duncan is, by the way, the individual that most consider the best Power Forward ever.

Karl also worked on his shooting range during the course of his career (once shooting 37.2 3pt% for the season, shooting nearly 50 threes -- not bad for a guy who finished that season scoring 31.0 ppg, shooting 56.2 fg%, getting to the line 11.1 times a game and grabbing 11.1 rpg over 82 games). More than anything, Karl greatly improved his body. God gave him the tools, he had to craft himself. And he did, especially when you compare how he looked as a rookie to the Adonis he became. 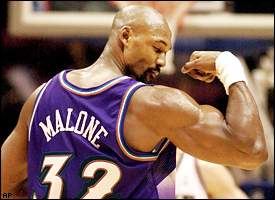 Malone was far from perfect as a basketball player or as a person, but he did do a lot of things right in the time when we knew him as a Jazz man. He came from the most humble of backgrounds and applied himself and became a success because he was not afraid of hard work. (Something a lot of younger players have an outright phobia of) He was roughly LeBrons size, but instead of doing amazing LeBron things against guards and small forwards, Malone was doing LeBron type things against Power forwards and Centers. (Just check youtube sometime) He also had a perpetual chip on his shoulder from his draft position (#13th) and the small school he went to (the verifiable power forward academy of Louisiana Tech). This chip allowed him to go out and score 61 points the day after the All-Star game starters were announced, and A.C. Green had beaten him. (Go fan voting!)

He had this perpetual hunger to get better for the sake of being better. He wasn't the type of guy who would call a press conference after retiring during the NBA playoffs to tell the media that he had decided on a date in the future that he would hold another press conference where he would reveal to the world if he would or would not be returning to basketball. That was the insecurity displayed by Michael Jordan after he left the game - and did not like people talking about Shaq and Kobe and Iverson. When Malone left the game he was more than content to leave the game to the younger players, and moved out of the lime light.

That's not to say that his good works were done. He went back to giving back to the communities that supported him all his life. He's currently a strength and conditioning coach for his alma mater, and during the horrible devastation in the aftermath of Hurricane Katrina he did not just write a check (like Jordan did). Instead he moved his entire company down there to help with the clean up -- even after FEMA said no. Yes, Karl Malone was working 18 hours a day sitting behind the controls of a big logging machine to help move debris after Katrina.

This is giving back. This is what his mother taught him in life. Karl loved his mom greatly, and her death resulted in him pulling himself out of a 3rd Olympics which USA Basketball wanted him for - in 2000. We all know how great Jordan loved his Dad, a victim of gun violence -- Jordan loved his dad so much that he went on to produce ZERO gun safety public service announcements. Food for thought. Well, because this has deviated (in true Utah Jazz form, mind you) from being a pro-Karl Malone piece into an anti-Jordan rant, let's finish it with this statement. Jordan may have won the first two battles against Malone, but if their progeny is any indication, Karl Malone's kids are certainly winning the genetic war against the Jordans. (Karl's daughter is a WNBA champion who has been the MVP of their all-star game, and one of his sons is playing in the NFL -- Jordan's kids have the athletic abilities of Jar-Jar Binks, on the other hand)

Back to the Mailman though -- he destroyed record books, other players, and the hopes and dreams of opposing fanbases. Some fans (like Rockets fan) think he is worse than Hitler or the Devil. I can kind of see where they are coming from, as they are a little butt-hurt over the fact that Malone (in 105 games including the playoffs) has a career scoring average of 24.78 ppg against them. That's a watered down mark, of course, as some of his lowest scoring games against them came as a Laker. Malone was much more than a scorer though, after all, he is 11th all-time in the NBA Steals list, 7th all-time in rebounds and 1st all-time in grizzly bears killed in one-on-one combat.

I can ramble on and on about Karl, but will spare you. Please join in the fun of celebrating Karl's NBA career by sharing your stories and comments below! And remember, Karl Malone was death/time, destroyer or worlds.

Thanks to memoismoney for this vid.