Sometime today we'll likely hit 500,000 visits since the launch of SLC Dunk. It's been an exponential climb thanks to SBN and you the readers/contributors/Googlebots/site scrapers. I know at least 495,000 of those visits did not suck.

It looks like Memo is targeting to be back for the first game of the season. He's going to miss training camp and the pre-season but wants to be back by game 1. That's an ambitious goal but it looks like he's well on his way to reaching that.

We'll need his offense that's for sure but I doLakers vs Jazz coveragen't want him coming back at anything less than 100%. I don't know how many more injury setbacks I can take.

If he needs someone to chauffeur him around in his Ferrari, I'm sure he would have plenty of takers this summer.

UPDATE: As others may know, but I did not, Siler doesn't write the headlines for his columns. So the "All hope is lost" line didn't come from Siler.

I know being down 3-0 gives us next to zero chance to come back in this series, but Siler's title from one of his articles seems particularly harsh,

Jazz: All hope is lost

Yeesh. I know he's not a biased reporter but... yeesh. That's a kick to the groin.

One of my favorites from docfunk 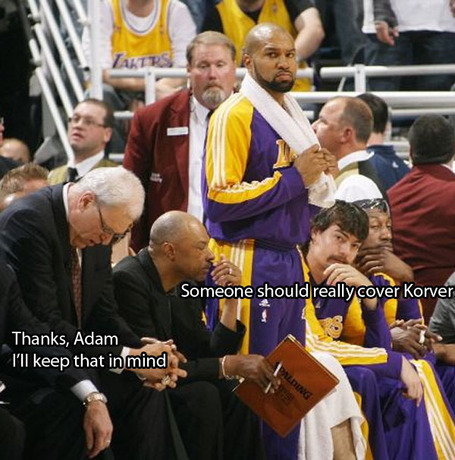