NO LUXURY TAXATION WITHOUT REPRESENTATION!

Share All sharing options for: NO LUXURY TAXATION WITHOUT REPRESENTATION!

"A Little rebellion now and then...is a medicine necessary for the sound health of government"

It is high time for a little rebellion, but instead of the health of the government, the health of the Utah Jazz organization is at stake.  So grab your pitchforks and lanterns and follow me to the electronic doorstep of the Jazz front office, better known as "airing your grievances in the blogosphere."  Or rebel against what I have to say.  I don't care either way, as long as you bring passion and a sound opinion.  Go hard or go home.  Or at least keep your thoughts to yourselves.  But no matter where you stand today as a Jazz fan, there is one thing that is going to pave the road of the franchise for the next 3-5 years for better or worse:  What to do about Carlos Boozer? 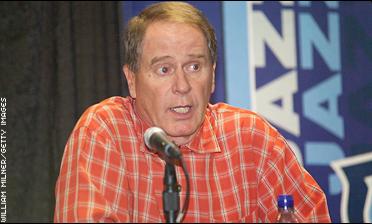 Are you listening closely, Kevin?

We have hashed this situation out and had a passionate debate about it after jake1ar ranted about his distaste for Boozer, but after reading what many had to say, I realized that perhaps the Boozer situation needs to be laid out in plain terms.  You all know where I stand, but I don't think you know exactly why.  And of course, a well thought out rebuttal would be very welcome.  And perhaps people with power in the Jazz front office will be personally looking at what we discuss here about Carlos Boozer.  So make your case and make it well.

Ladies and Gentlemen of Jazz fandom.  It would be in the Jazz's best interest to allow Carlos Boozer to sign with another team this offseason.  And I am going to give you 4 reasons why:

I found a really nice summary of the Jazz's salary cap situation at nbaroundtable.com.  For those of you who don't have the time to read such things, I will summarize:

As of today, the Jazz have 7 players signed, sealed and delivered to them next season to the tune of $54.8 million.  Those players are Deron Williams, Andrei Kirilenko, Paul Millsap, Mehmet Okur, CJ Miles, Kosta Koufos, and Ronnie Price.  The salary cap next season is going to be around $56 million and the luxury tax line will probably fall around $68 million.  So for those of you who don't know, the Jazz can only use their exceptions to sign free agents.  The Mid-Level Exception will be the most money they can offer and if will be around $6 million a year.

Carlos Boozer is a free agent.  Kyle Korver is a free agent.  And Wesley Matthews and Kyrylo Fesenko are restricted free agents, meaning the Jazz can match any offer made to those two players, if the Jazz chose to do so.  The real question is:  What do Korver, Boozer, Fesenko and Matthews mean to the Jazz?  Obviously the Jazz would like to have at least 3 of these players back with them next season, but will they be able to afford to do so?  If you bring back Carlos Boozer at even his current contract, the Jazz would almost be guaranteed to pay the luxury tax without major cost-cutting moves.  NBA roundtable has Fesenko being resigned for $1-2 million a year, Wesley Matthews about $2.5 million a year, Kyle Korver at $4 million and Boozer at $12-15 million per.  You could argue that a team might offer Matthews a little more than $2.5 million a year, but I am guessing that the average of those numbers is accurate.

If the Jazz brought back Matthews, Korver and big Fes at those numbers, then they would only be at about $62 million and have a little wiggle room to bring Sundiata Gaines and Othyus Jeffers back or use some of their MLE and still avoid paying the dreaded luxury tax.  So in a way, it is accurate to say that the Jazz could either re-sign Carlos Boozer or else re-sign all of their other free agents and have $2-4 million left over to use on the rookie, who will cost about $2 million himself.  Are you starting to see what re-signing Carlos Boozer would cost the Jazz?  Probably Korver and possibly Matthews.  And certainly any free agents that currently play for other teams.

There is one way the Jazz could re-sign Carlos Boozer and avoid economic strife:  trade one of Deron Williams, Andrei Kirilenko, or Mehmet Okur in a straight salary dump.  Giving away one of our better players for free.  They aren't trading Deron Williams.  Period.  Andrei Kirilenko is a possibility but his contract is so large, it would take finding a team with tons of cap space.  Mehmet Okur is the most likely, but do you think teams are lining up to take on Okur's salary for free after his Achilles explosion?  It would certainly cost the Jazz something of value, like their Knick's lottery pick.  Is it worth giving up the pick so a team will take Okur and the Jazz can re-sign Boozer?  Maybe to you.  Not to me.  Not in a million, kajillion years.  But it is an option.

Or else, maybe the Jazz have way more financial flexibility than any one of us knew and they can afford to bring back the same team next season.  Sign me up for that.

But really, I could quit here and have made a very valid point about the Jazz's inability to re-sign Boozer.  It is super tough economically.  But of course, I won't stop there.  We're just getting started....speaking of the aforementioned draft pick...

2. THERE ARE GOING TO BE GOOD BIG MEN AVAILABLE THIS OFFSEASON TO REPLACE BOOZER

Before you get all hot and bothered, I am not talking about guys like Chris Bosh.  I am talking about guys like Derrick Favors and Craig Smith.  The Jazz are going to own either the 1st, 2nd, 3rd, 9th, 10th, or 11th pick in the upcoming draft lottery.  There are no other options.  And guess what?  This upcoming draft is deep and loaded with big men.  Here is my draft board for the Utah Jazz, meaning who they should draft and in what order.

That's obviously my opinion and many Jazz fans will have different opinions.  Lots of people like Udoh and Whiteside much more than I do.  We can debate that topic another day, but just notice that 7 of the top 11 prospects play PF or C.  The Jazz can replace Boozer's absence in the Jazz rotation with a rookie.  Or at least replace Millsap's place as the backup when Millsap takes over Boozer's spot.

And if the Jazz are lucky enough to draft one of the super-talented guards in the top 4, then they can certainly sign guys like Craig Smith, or Hakim Warrick to play some PF minutes.  I also advocate letting AK play more minutes at the 4 when Carlos Boozer leaves.

3.  THE JAZZ CAN AND DO WIN GAMES WITHOUT CARLOS BOOZER

I have had this argument with a handful of Jazz fans.  This is how the argument goes:

Me:  The Jazz can win as many games without Carlos Boozer next year as they did this year.

Guy who doesn't know any better:  What?  How many games did they win last year when Boozer was injured?

Me:  Not as many as you would like, but injuries plagued the entire year.  If you have 2010's health in 2009, then the Jazz win as many games even without Carlos Boozer.

Facts:  The Jazz were 6-1 this season when Carlos Boozer didn't play or played less than 15 minutes due to an injury.  The lone loss was the last of the regular season to Phoenix.  If you take games where both Millsap and AK were healthy that number is 5-0 when Carlos Boozer doesn't play.  Over the last 3 seasons Carlos Boozer, and obviously others, have missed a big number of games.  At face value, we only do okay when Boozer misses games.  This season we were 6-1.  Last season we were 26-19 without Carlos.  In 2007-08, the Jazz were 1-0 without Boozer.  The year before that they were 6-2 without him.  So in the last 4 years, the Jazz were a respectable 39-22 without Boozer in the lineup at all.  That is a 64% winning percentage.  But how about games that Carlos Boozer missed over the last 4 seasons where Williams, Millsap, AK and Okur were all available?  I was shocked.  The Jazz went 22-9 when those other 4 players played while Boozer was out.  That's a 71% winning percentage.  Obviously, those other 4 players are not always healthy, but it's hard to argue that the Jazz have a tough time winning without Carlos Boozer.  I would argue they have a hard time when they are missing Boozer AND one of the other main guys too, but the Jazz can win games without CB-5, plain and simple.

4. THE JAZZ HAVE BEEN IN THIS SITUATION BEFORE

The Jazz have been in the situation of having a good player in a main position and having someone on the bench ready to replace that player if the Jazz allowed it.  I'm not even talking about Deron Williams replacing the powerhouse tandem of Keith Mcleod and Milt Palacio.  Let me take you back to the 1987-1988 season.  Believe it or not, John Stockton didn't start for the Jazz in his first 3 seasons.  The Utah Jazz starter was Rickey Green, a 6 foot point out of Michigan.  In 1984 Green averaged 13 and 9 with 3 steals a game and represented the Utah Jazz in the NBA All-Star game.  He was no slouch. SLtrib named him the 10th best Jazz man of all time.  But in 1988 Stockton started taking most of Green's minutes and Green was eventually taken by Charlotte in the expansion draft.  The rest is history.  What would have happened if the Jazz continued to split minutes between Stockton and Green?  I'm glad we don't know.  The truth is that Carlos Boozer is the player he is going to be.  Paul Millsap is still on his way up in his playing skills.  He has improved some aspect of his game each season.  It is his turn to show what he can do as the full-time starter.  Boozer had his shot and it wasn't enough.  You can argue that the Jazz have improved this season with the same cast of characters, but it would be hard.  They are getting beaten more badly by a less talented Laker team than 2 years ago.

So in closing, it is time to move this team in a different direction.  It is time to rebel against the thought that Carlos Boozer is a center piece to this team moving forward.  If he walks, we can win as many games next season, develop our rookie big man, and have an extra $14-15 million in 2011 when AK's contract comes off the books.  I rest my case.