Siler has some good recaps on the locker room clean-outs from the players. Here are parts 1, 2, 3. some highlights,

Q: You've been here for three years. Do you want to continue in Utah and see where it takes you?

A: Definitely I am looking Utah Jazz as most probable team that I want to play with because it's Utah Jazz, my favorite coach, my teammates, my favorite fans that already love me. Thank you, fans. I applaud yesterday after the game the crowd. They deserve that how many times they applaud for us, cheering.

I can hear the broken English perfectly in my head.

Q: You bulked up when you showed up to summer league last year. What's your off-season focus going to be?

A: I'm going to do the same thing [sir]. I always try and get bigger and stronger [sir]. At the same time, I know the game better this year [sir]. I'm just going to try to incorporate all that into the summer league [sir]. [I'm just trying to be the best fighter pilot I can, sir!]

Going into the season I thought that The KOOF would leapfrog Fess in PT and ability even though he was a couple of years behind him. He didn't ever really look comfortable when he did play save for his time at Orem.

Greg Miller posted a teaser of a picture of what the new Jazz uni will look like. Last time, we saw the bottom of the numbering. This pic doesn't give too much more other than the colors and the trim which isn't a surprise.

The big question is whether the primary logo is just the note or whether it's the entire Jazz name spelled out, 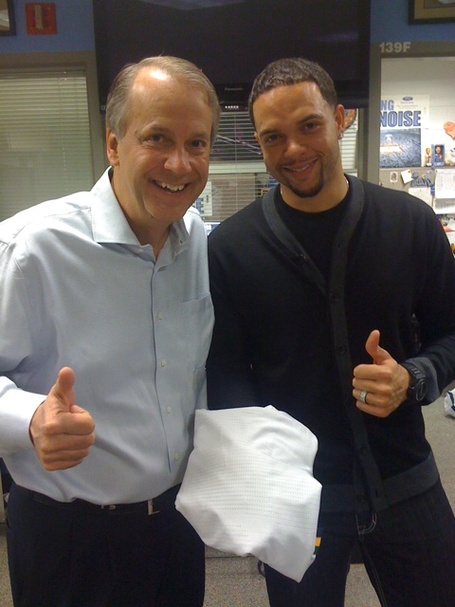 A couple of takeaways from Deron at the clean-out interviews. One is that he's been told to rest his wrist for the next month or so but he could end up having surgery on it if it doesn't heal. I know that he wants to play in the World Championships. I'm going to be a bit greedy and hope that he doesn't put that tournament above next season. If it's not getting any better in a month, I wonder if he still tries to play or downplays his injury. He's been banged up all over his body this season so it wouldn't be the worst thing if he doesn't play this summer. More importantly, I wonder what it will do to his dodge ball game.

"I think if we want to compete for a title, we have to add pieces," Williams said amid the boxes in the EnergySolutions Arena locker room. "You see teams doing deals year after year and we stay the same and we get the same results.

"It wasn't a threat or anything like that. It was just being honest. I feel like if we want to compete for a title, we need to make some moves."

The Jazz had their hands tied when everyone opted back in last summer. This season they have their hands tied in part again due to the cap. Still, things can be done. Kevin O'Connor also stated that he wants to improve the team as well. So if that means improving the current team, some players are going to have to go and get upgrades at those departing. Whether that's through the draft, trades, or using the MLE, that's what's going to have to happen.

I think the player we're getting in the first round will be an upgrade over Fess or KOOF. So there's one spot. Kosta has a year remaining while Fess is a restricted FA. So could one of those two be going? Does Kosta get packaged in a trade? Do they let Fess go? That's a hard choice right now with Memo's uncertainty.
We'll know a lot more when the lotto selection happens next week. If the Jazz move way up, they might be getting a wing. Whereas if they stay put, it will likely be a big man.
While the mantra of the Jazz has been stability and not making big changes, we might be seeing the biggest changes to the team this season than we have in the past.

It looks like there's not going to be a Rocky Mountain Revue again, if ever. Despite an announcement earlier this year about dates, the Vegas summer league has likely put an end to the Revue here. Instead, the Jazz will head to Orlando again. It's still early so I don't know if they'll have a combined squad again or not.

Though the Jazz haven't said that there will never be another Revue, the writing is on the wall.