All Hope is Not Lost

Share All sharing options for: All Hope is Not Lost 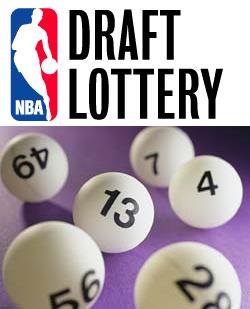 Apologies to Ross Siler for bringing up bad memories with the headline, but the upcoming draft should provide a lot of hope for Jazz fans, even if there was little down 3-0 to the Lakers.  At worst, the Jazz are going to get the 11th pick in the draft.  Most likely it will be the 9th pick.  But there is also a sliver of hope that the lottery will smile down on the franchise.  But how much hope should Jazz fans have that the pick could be top 3?

It should be pointed out that there are only a few places the Utah Jazz can mathematically pick in the draft.  The Lottery only pertains to the top 3 picks.  If you aren't top 3, then the rest of the 11 picks just go in order of the standings.  So the Jazz can either get picks 1 through 3, their own 9th pick if everything goes according to odds, or the 10th or 11th picks, if one or two teams that finished 10-14 jump up into the top 3.  The odds are in favor of the Jazz keeping their 9th pick, but what are the odds they can get a top 3 pick?

There is a nice breakdown of the probabilities here.  Essentially there are 1000 different scenarios for getting the top pick and the worst team has 250 chances out of 1000 to win it, the second has 199 and so on.  The Jazz this year has 22 chances in 1000 or 2.2% chance.  There is also an 80% chance of keeping the 9th pick.  Something interesting is that even though the overall worst team, the New Jersey Nets, has the highest probability to get the top pick, The Nets are most probable to get the 4th pick with a 36% chance.  That comes into play, because of...

This exact science of lottery odds has existed this way since 1994, and a similar lottery existed since 1990, but the worst team only had a 16% chance instead of 25% to win the lottery the first four years.  So in the last 20 years, you would expect the worst team to win the lottery 5 times, right?  They have only won it 3 times.  Fifteen percent of the time.  Surprisingly low.  And you know what's worse?  The number one pick has been moved to the 4th pick, the worst case scenario, 7 out of 20 times or 35%, which remember is the exact odds of the worst team getting the 4th pick.  If anyone has to worry this year, it is the New Jersey Nets.  Can you imagine the difference between having the top pick and the 4th pick if you are the Nets this year? Ouch.  On average in the last 20 years, the average place the lottery winner held is 4.2.  And only twice in the last 20 years have the 3 worst teams won the top 3 picks (1994 and 2004).  The top 3 picks have never gone to the worst, second worst and third worst teams.

Of the 60 possible top 3 picks in the last 20 years, there have been a lot of surprises.  Just two years ago, the Chicago Bulls were the 9th worst team and had a 1.7% chance of winning the lottery, but they did just that.  In 1993, the Orlando Magic had less than 1% to win the lottery, but they did.  They were the 11th worst team.  They drafted Chris Webber and traded him to Golden State for Anfernee "Penny" Hardaway.  So there is a chance for the Jazz.  If they landed the top pick, they would be the 3rd team in the last 20 years to be the 9th worst team or lower.  That's as many times as the worst team has won the lottery too, to put things in perspective.

After all, that's why they call it the lottery.