I actually feel for Carlos Boozer and his "performance" against the Lakers and it's not just because he is (was) a Jazz man. When you're going into free agency, the last thing you want to do is have a poor showing in the playoffs.

And if you can't guess that this post is written by Matt Moore, well, you need to do some more reading. Maybe it won't end up hurting him much.

I still think he'll get a max deal somewhere because there are a ton of teams with cap room and some of those are going to be pressured to sign a name when they miss out on the big names.

Kelly Dwyer from BDL has his season recap up on the Jazz. Hard to argue with this,

Apologies for making this so Laker-heavy, but this is your obstacle, Jazz fans. Any all-day discussions of what the Russians or the Bulls had to do in the late-1980s had to do with the United States and the De-troit Pistons, and though it's entirely possible for the Jazz to slip into the backdoor of the Conference finals or NBA Finals should another team match up well and defeat Los Angeles next season, that's really not something you want to bank on, is it?

That's why the draft will be an important one. Let's face it, we're not getting away from LA right now. We haven't made a move to get us into the top 3 teams in the west just yet. You could argue that injuries played a part in that this year but had the Jazz taken care of business against the teams they should have beat, they still could have made it.

To be in the top 3 or top 2, it's 82 games of great basketball. Every team has their slumps, just less of them. So getting back to my point: it seems as if the Lakers are going to be the top team in the West for a couple more years at least. If we keep hanging around the 4/5 seed, we're going to see them again more than likely.

So the draft will be big for a bunch of reasons. One, we're going to have to draft towards competing with LA. A lot of other teams will be getting bigger and longer as well with players returning from injury and from roster changes.

Second, if we're to become a permanent fixture in the top spots in the West, that draft pick is going to have to help us get there.

We haven't talked about Kyle Korver possibly being somewhere else next season. He's indicated a bunch of times that he likes it here in Utah and would like to be back. We know he's not so much about the money because he donates a large portion of his salary to charity.

However, he stated to Ross Siler that this is the first time he'll be able to choose where he wants to play,

At the same time, this is the first time in eight years that I get to pick where I get to play.

Well, he has already done that once when he opted to return to the Jazz last season. He could have opted out and left for another team. His choices were severely limited though. So this will be the first time when there are better options for him.

If you're worried about him staying around, we also learn from that article that the Dodge Ball tourney with Deron is back on. So he'll at least be back for a day.

It looks like Memo's injury is worse than I thought. It appears they have amputated both legs between the knee and his hip because there's nothing there: 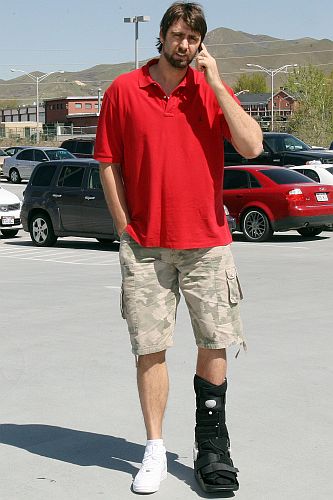 I wonder what moni's take is on this outfit.

Thanks to Clint for the poll idea