The one in which Fes' summer plans turned into Shandon's contract negotiations...

Share All sharing options for: The one in which Fes' summer plans turned into Shandon's contract negotiations...

...turned into Howard Eisley's contract negotiations turned into the Knicks pick turned into Oliver Twist turned into Jazzman Carlos Boozer's first and last games were against the Lakers, i.e. we've come many full circles. It started with this seemingly innocuous line from desnews:

[Fes'] short-term plan for now is to travel to California in the next few days to meet with his new agent, Dan Fegan... 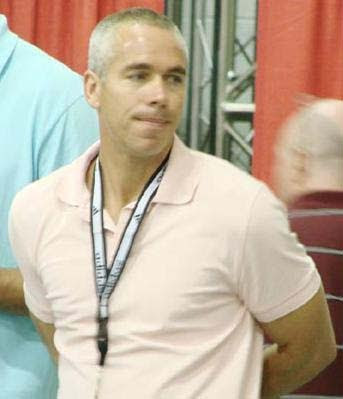 I remember reading a while back that Fes' agent, Jason Levien, had taken a job with the Kings. I didn't know that Fes is now represented by Dan Fegan. Upon reading that name, it immediately elicited a figurative bad taste in my mouth. I remembered that he played a role in Shandon Anderson's ridiculous contract negotiations (sorry, shandonfan), but I couldn't remember all the details. To sum up the enlightenment scored from a trawl through the desnews archives: In the spring of 1999, Anderson said, in regards to his pending free agency, that playing time was more important than money. During negotiations, the Jazz offered, along with a 4-year, $15M contract ($3.75M per/yr), a starting job [which would have sent Horny to the bench]. Anderson and Fegan wanted upwards of $8M/yr, escalating to $12M/yr over the course of the contract. The Jazz upped their offer to 5 years/$20M and eventually to $22M. One week later, Fegan told the Jazz that they were done negotiating "on any basis" and to stop contacting them. By this time, Shandon was saying that it wasn't playing time, it wasn't money, it was "lifestyle." The lifestyle was apparently vastly superior in Houston, because--within days--he signed with the Rockets for 2 years/$4.2M. 5 years/$22M vs. 2 years/$4.2M. Sounds to me like a young kid (Shandon was 25 at the time) was getting bad advice from and being manipulated by his greedy dbag agent. Five years later, when he was a Knick, Shandon said that he never disliked Utah, and that his years with the Jazz were the best years of his career not only because of what the team did (Finals runs), but because of how much he learned from the coaches and Stockton/Malone/Horny. He also said that he signed with Houston because of "longevity" and that he'd been trying to get a longer contract. (Remember, the Jazz offered him a 5-year deal, while his contract with the Rockets was for two years with an option for a third.) I repeat: Sounds to me like a young kid was getting bad advice from and being manipulated by his greedy dbag agent. Less than a year later, the Jazz went through THE SAME THING again with Fegan and another one of his clients, Howard Eisley. The Jazz offered Eisley a five-year, $20M deal; Fegan and Eisley wanted six years at $30M. Eisley was on the verge of turning down the Jazz's offer to sign with the Mavs for its $2.25M exception (2 years with player option)--leaving almost $18M on the table--when Mark Cuban, who wanted Eisley signed to a longer contract, worked out a four-team, nine-player deal that had the Jazz signing Eisley to a 6-year+team option deal and sending him and Adam Keefe to the Mavs in return for Donyell Marshall from Golden State and $1M from the Mavs. Interesting Side Note 1: As I said earlier, Cuban wanted Eisley on the Mavs long-term when the trade happened. The Mavs ended up trading Eisley less than one year later to the Knicks...where he was reunited with his former Jazz teammate of three years and fellow Fegan client, Shandon Anderson. Interesting Side Note 2: Eisley and Anderson were teammates in NY for 2.5 seasons. Eisley was one of four Knicks and two draft picks sent to Phoenix in Jan. '04 in the Stephon Marbury trade. (If you're a Jazz fan, you know where this is going...) One month later, Phoenix sent both of those picks to Utah along with Tom Gugliotta in exchange for Keon Clark and Ben Handlogten. The first of those picks, a 2004 1st round draft pick, became Kirk Snyder. The second? This is the story of how we got the Knicks pick. Interesting Side Note 3: The Suns waived Eisley during the 2004 off-season and he ended up re-signing with Utah five days later and just hours before tipoff of the Jazz's season opener* (the Jazz were in dire need of a point guard because Arroyo had a sprained ankle and Lopez was recovering from surgery. Apparently, Jerry did not take AK's offer to play the point seriously). Don't know where to look to find out whether Fegan was still Eisley's agent at that time. Interesting Side Note 4: Whether it was intentional or not, more than one Deseret News reporter misspelled Fegan's name as "Fagan" during the Shandon Anderson debacle. "Fagan" is reminscent of "Fagin," the Oliver Twist character that Charles Dickens described as a "receiver of stolen goods." Quite apt, if you ask me. Interesting Side Note 5: Fegan also presided over the Anderson Varejao holdout debacle:

"When Anderson Varejao told ESPN.com that he's become so frustrated with contract negotiations that he doesn't want to play for the Cavaliers anymore, many wondered if it was Varejao speaking for himself, or his agent Dan Fegan."

Sound familiar? Varejao's teammate and ex-Fegan client Ricky Davis told the Cleveland Plain Dealer at the time, "[Fegan] does dirty stuff, under-the-table things. [Varejao] needs to change agents immediately if he wants to get this thing done." An unnamed agent, meanwhile, described Fegan as "crazy" and further said, "He's known for picking up guys in their contract years, and that's taboo in our industry. He did that with so many players, including Varejao. He's not well-liked among other agents. . . . His biggest problem is that he doesn't care about relationships. It can't always be about the money." Interesting Side Note 6: My friend went to Boston College with Eisley, and he says that Eisley only liked white girls. Just thought I'd throw that in here, irrelevant as it is. Back to what brought this post on: Dan Fegan is Fes' agent. FRAK. *For additional reading, check out the recap from that game, which also happened to be Boozer and Memo's respective first games in Jazz uniforms. An excerpt:

On the very first possession for the Lakers...Kirilenko rejected fellow All-Star Kobe Bryant's running jumper. On the other end, he slammed home the rebound of Giricek's missed 20-footer. Thirty-nine seconds later, he blocked Lamar Odom's layup. And less than a minute after that, he swatted away a shot from Chris Mihm