It looks like Greg's off-season interviews with KSL is becoming tradition.  Did LHM do these?  I don't recall. Here's his latest,

He had another interview last season almost to the day.

I missed this story from Marc Spears last week where he talks about Boozer leaving.  I think he sums things up succinctly,

One NBA general manager said Boozer could receive a five-year, $70 million deal that falls short of the maximum.

When asked why he thought Boozer wasn’t worthy of the max, the GM said: "His age, injury history, defensive limitations, the alternatives at the power forward position and that fact that he is the second option place his market value below max. He’s got character, is a great teammate, productive and competes every night. Any organization would be lucky to have him, but he can’t get you to the Promised Land on his own."

That's the first that I heard that he might not be getting the maximum.  Well, I guess it's the second after Greg Miller's comments in the video above that he might not get a max deal.  That $14M/yr deal would certainly give him his raise.  I wonder if he gets a team option put on whatever he ends up signing.

There seems to be a slight correlation with our three-point shooting percentage and our number of wins.  Here's a graph of 3P% and wins over the past 5 seasons, 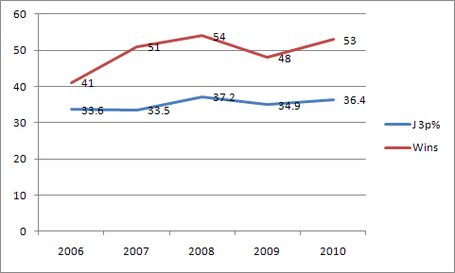 Korver of course broke the record last season with 53.6% and shoots over 40% for his career.  Even a couple of percentage points can mean quite a bit in terms of wins and losses if you go based off the graph above.

So while the averages of everyone else is right around 36, 37%, Korver helps bring that percentage up considerably.

No word yet on who is going to represent the Jazz at the lottery tomorrow night.  There have been suggestions ranging from Fesenko to Scott Layden to Wesley Matthews.

How about Deron Williams?  He was our last lottery pick and he turned out pretty good.

We all know that Matthews isn't intimidated by anyone.  Going up against Kobe and Melo is nothing compared to being a rookie and telling Deron that Illinois sucks and telling Boozer that Duke sucks (the whole video is good with those comments coming in at about 2:30):