I've kind of had a Facebook page for SLC Dunk but then I found out I was doing it wrong.  anyway, I think I have it now.  So for all of those Facebookers that haven't been scared off by FB's lack of privacy measure, here's the page for SLC Dunk.  You'll also see a link on the right sidebar between the Fan Posts and Fan Shots.

For now, it will primarily be links to SLC Dunk posts but I could be running some FB-only contests as well.  We'll see how it goes.

Right now we have 0 fans.  Who will be the first?

So, is it too late to start a blog about LOST?  I have a lot to talk about with that show after last night's ending.  Maybe I'll post some stuff on FB about it.  I liked the ending but there was just so much left unanswered.  I didn't expect everything to be answered, but there was a lot left to be desired.

Don't worry, this will probably be the last time you'll see LOST here unless I find some way to compare the draft to the regular season finale.

Mike Brown, out as coach in Cleveland.  I guess that means we should have gotten rid of Sloan right after 1995 or 1996.  What?  They then reached the finals in 1997 and 1998?  I guess the only difference is that Sloan is a good coach and Brown is not.

What does that mean for LeBron being back?  It probably makes no difference as I don't think that was a huge factor in his staying or going.  But now that I say that, is he going to want to stick around for a new coach and a new system?  Probably not.

Paul Millsap gets hacked, no foul called (via chris29579)

It looks like they'll be changing Horny's retired uniform in the rafters from the late 90s version to the classic note according to Greg Miller,

Funny you should ask that question. Jeff thought the same thing, and asked that we change his jersey to match the others. We were just waiting for the season to get over so it wouldn't take away focus from the team and the playoffs. Next time you're in the arena, you'll see Jeff's new "matching" jersey hanging from the rafters.

I forgot that he even wore the classic note jersey for a couple of seasons; the mountain logo is all that I remember him in.

Speaking of the classic note, the "new" logo will be revealed in mid-June.  Also, if you attend the draft part on June 24th, you'll be able to see the new logo on the court. 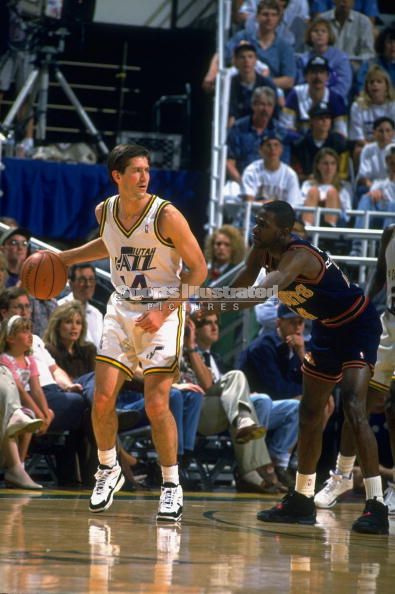