This is pretty hush-hush right now but I got a sneak peak at the shoes the Jazz front-court will be wearing on Saturday, 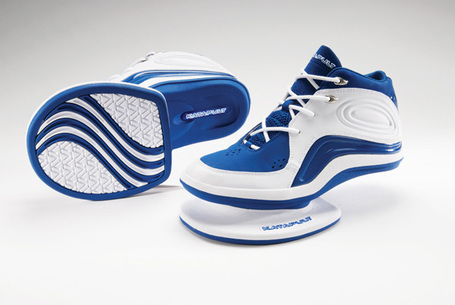 BBJ is getting upset!

I don't know how the Lakers can roam into the paint after every shot and not get blocked out.  It doesn't matter if they're taller or shorter if you're not putting a body on them they're going to get the rebound.  Boozer was the biggest offender but nobody else was exactly putting on a clinic either.

At this point I would almost rather the Jazz suffer a 40-point beating like the Hawks had than see another get down big, come back, fall short, get blown out late type of game in LA.  I mean, the first 15 times you can right off as coincidence, but 16?  Come one.

With each of these losses we've always been short in just one area it seems.  Deron has a bad night.  FTs aren't going in.  No foul calls.  We have to have a perfect game it seems to pick up a win there and we just haven't done that yet.

I know they still have time to develop and they're getting some of that experience now, but when you think of a championship team, are Fesenko and Koufos a part of that?  They're being forced to play outside of their normal roles right now but they represent some of the team's last efforts to get bigger and longer.  I don't know if they were drafted with the Lakers in mind but looking at them now, can either of them be considered a central part of a championship team?  If they need more time, how much do you give them?

I know they need more seasoning but neither of them have done much for me to believe that they're going to be a major force.  They've had their moments to be sure but they don't stand out to me as even supporting cast members on a championship team right now.

What would lead you to believe that they're going to make the jump?  Maybe not even the jump, just a step up?

We'll see what kind of series we have when play resumes on Saturday.  I remember going to last year's game three where they barely pulled it out at home.  If this series is going to turn around, and I think there's still a chance, we're going to have to see a dominating performance at home from the Jazz.  Something that will show us that they're not going to get beat in game four.

I think we'll shoot better at home but will we see a defensive or rebounding effort?  I think we need two solid home wins to make this a series.  If we just squeak by in them, I don't know if we'll have enough to pull one out in LA.

Let's hope AK can be a game-changer.