Deron finished just outside of the All-NBA defensive team.  He got 10 point total (14 points was the lowest total by someone making the team) including 2 first-place votes.

Ak even got three 3 points with his 1 first-place vote.

Going based off of last year, we should hear the All-NBA 1st-3rd teams announced next week.  I'm guessing that Deron makes the second team as he probably won't edge out Dwyane Wade for the other guard spot.

They didn't have them up until yesterday, but here are my answers to five of Silver Screen & Roll's questions.  I was a little more pessimistic for the series for those questions than I was in the DunkCast.  Unfortunately my answers to them were more correct.

Looks like Memo now has a walking boot .  Check out the incision from his surgery, 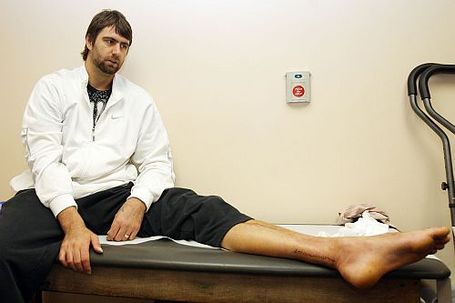 Speaking of Okur, his injury pretty much sealed Carlos Boozer's fate for next season.  If they Jazz were going to bring him back, and there had been discussions, then they were going to have to move either Okur or AK or else pay a huge luxury tax.

Right now the Jazz have about $54.7M committed in salary next season.  The expected cap is going to be about $56.1M and that's higher than they thought it would be.  The Jazz are going to have to give Wesley Matthews a raise and will likely bring back Sundiata Gaines.  Korver is a FA and I know he wants to be back and the Jazz probably want him back.  So before we even get to KK's contract, the Jazz are going to use up that extra cap space on Matthews and Gaines. That's not even talking about Fesenko yet.

Without Korver or Fesenko, that gives us 9 players on the roster and you have to have at least 13 so now you have to add 4 more players and you're already over the cap.

The Jazz are also going to have to pay their 1st-round pick as well.

We won't get into roster moves just yet, but my point is that when Memo went down, that meant that Boozer was going to be going.  Memo isn't tradeable right now.

That means that AK would have to go if Boozer is going to be kept and we would have to trade AK away for picks or something that doesn't bring back money.  They could still trade AK by next year's trade deadline but then you're going to be pressured to trade away more assets to get someone to take on his salary.  I don't think that happens either.

So that's why I think Boozer is gone.

As this internet kids say: This.

And Utah? What happened to your point guard?

Not only does Deron Williams(notes) have to start making shots, the guy has to start shooting more. Way more. He needs to be more aggressive and he needs to start dominating the ball. This is an Iverson situation, you have to understand, and Williams needs to have a massive imprint on just about every successful Utah possession (the score, the assist, or the hockey assist) for the Jazz to survive.

That's just the reality of the situation, with several Jazz injured, the team's history against the Lakers, the wing players alternately ineffective and sufficient and two starters injured. To say nothing of Derek Fisher's(notes) presence.

Deron's going to have to pull some Isiah-level mess. It's the only way the Jazz can compete. Sure, they'll stay in games; Los Angeles doesn't boast the edge needed to make things one-sided. But if Utah wants to take both at home and make this series its own, Williams has to take over. Has to.

This isn't just scoring more, something that he's capable of despite his poor shooting performance in game 2, it's dominating every facet of the game with passing, defense, and shots.