The new logo will be revealed on June 15th with the jersey reveal coming in August when adidas and he NBA showcase the new unis for some teams.

SLC Dunk will be participating with Fanzz for the new logo. More coming on that later. In the mean time, check out Fanzz's page about the note. Here's the little promo video in case you haven't seen it already,

Boozer hasn't received his invitation (pg 2) to the superstar free-agent meetings being held in an undisclosed location yet (via BDL),

While Wade has mentioned a meeting of the prime free agents, Boozer's invitation has yet to arrive.

"I don't know how it's going to play out with phone conversations, text messages. Maybe we'll all go to the Bahamas and have a pow-wow," he said with a laugh. "I wouldn't be surprised if some of the superstars this summer that are free agents could be on the same team next season in an effort to try to win a championship."

If Boozer doesn't end up in Miami, it will shock me,

Boozer speaks regularly with Arison, the Heat's vice president of basketball operations Nick and son of Heat owner Micky Arison, not to get an edge on free agency, but because of a shared basketball background that dates to Nick's time as the Duke team manager and Olympic team liaison.

"That's my friend. We're going to be friends for life," Boozer said. "We've been friends for years since our Duke days. Our friendship precedes whatever happens in business."

Then there is the relationship with Wade. The two have grown especially close since playing on the 2004 Athens Olympic team.

"Me and D-Wade are really close," he said, with the two having consoled each other through marriage difficulties and other deeply personal issues.

And on it goes, all the way to the Heat's coaching office.

"One of our good friends is Erik Spoelstra," he said. "He comes to talk to our camps."

What if Wade leaves and the Heat are left to build around Boozer?

Anyone have this card of AK? 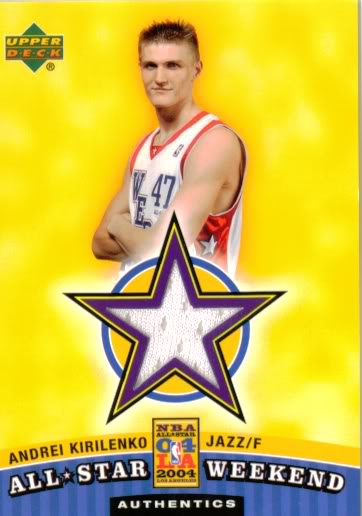 Let's hope to see more of this AK next season