Despite rumors to the contrary, the Jazz will not be relocating to the Pacific Division. I've heard the Portland has been trying to get into the Pacific Division for years though. Maybe we could do a swap for Phoenix? Would that make conference alignment better? I would take the Phoenix TV market over Portland. Big money there. That would be one less 8:30 start.

Nevertheless, I think the conference hold together.

Both DraftExpress and NBADraft.net have the Jazz taking Ed Davis now. NBADraft.net has the Jazz passing on Udoh, Aldrich, Henry, Babbitt, and Hayward. DE is the same except that they have Henry going to LA at #8. Of course these things change almost daily.

Of note though is that the Jazz have yet to work out Davis.

If you're looking for a defensive big man though, Davis is your guy. According to reports, he's severely limited offensively with no jump shot and no real offensive game. He does however have some great length and leaping ability for his size. He's also got an NBA body that needs some time to fill in. In measurements, he's close to or exceeds some of the best big men in the draft. He could be a solid pick if the Jazz aren't able to trade up.

Some details on the Dodge Barrage coming up from Matt Mitnick's facebook, 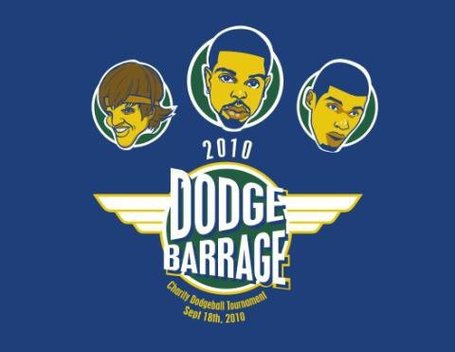 I'm guessing the third guy on there is Ronnie P? Also it looks like it's going to be held on Saturday, Sept 18th. Details I'm sure are coming.

It's fun to look back at what the previous mock drafts and scouting reports had on previous years. I went back and looked around for stuff from 2005 when we landed DWill of course. Some highlights,

Quotes from when Deron came in for his workout,

On how it went today
I thought I shot the ball well. The air got to me a little bit. It's pretty thin up here.

O'Connor's take on Deron:
When you look at him, you saw him play at Illinois. The fact he's in better shape than he was when he played in Illinois shows that he understands what it takes to succeed at the next level. I don't think anybody coming out of college could play 40 minutes a game, but he would be more ready than most. He has an advantage in size, maybe gives up a little in shooting.

Jerry Sloan's take on Deron:
I like him a little bit more because he's played longer, has a better feel, can see the whole picture very well. Some of the guys that come out early, that's something they can learn, if they have the talent.

I don't know if the brass had decided at this point that they wanted Deron over Paul, but some of their comments are pretty poignant.

Thanks for comparing him to Mark Freakin Jackson. Jackson has the longevity and the assists but should he stay healthy, Deron will surpass both of these guys. Some predictions are right on and some are a little off. However, some are pretty scary as to how close they predict stuff. Take Ian Thomsen's (SI) mock draft,

After that it kind of falls apart but after the first 5 picks, it's a craps shoot anyway.

So I guess what I'm saying is that we could end up trading up, down, or staying put. In any of those position we could draft a whole range of players. Should be an exciting draft.