Of course the big news today will be the unveiling of the the logo officially.  We've known the colors for some time of course.  That's all set to go down at 9:45 this morning in the ticket lobby of the ESA where everyone's welcome.

I can't make it unfortunately but if anyone goes and would like to post a FanShot with some pics or audio later, I will get it on the front page.

Fanzz.com will have stuff available immediately after the announcement.  We'll be putting on some contests with Fanzz to win some of that stuff.  I'll have some more info on that later this afternoon.

Here's a sneak peak at the new Jazz floor courtesy of @bobaagard, 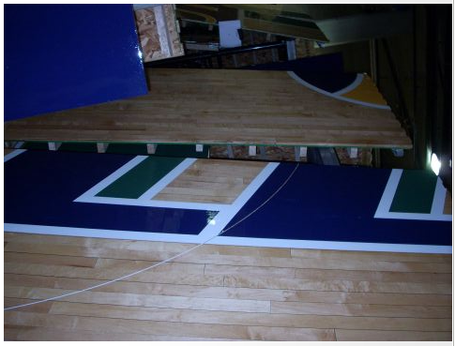 CJ Miles talked to The No Look Pass yesterday.  Though if you follow him on twitter, you know pretty much everything that's going on anyway.  They do ask him about his thoughts on Boozer, what it's going to take to beat the Lakers, and his off-season workout.  I like this part though,

TNLP: You didn’t make it a secret that you wanted to be Most Improved Player. But you did have a great postseason. Is this what we should expect from you next season?

CJ: Definitely. Just to play that way and be aggressive. I think I’ll be a lot better than that. I didn’t shoot as well in the playoffs as I wanted to (as far as jumpshots). Being aggressive and attacking the basket was a big part of my game that I added and worked on. And it was portrayed in the playoffs and towards the end of the year. I think it’s going to help me out a lot… getting to the freethrow line more. And defensively, I made a lot of strides also.

I hope he's developing an insatiable taste for driving to the rim and getting to the free-throw line.

Speaking on ESPN Radio in New York last week, Carlos Boozer said being a free agent has some advantages.

Though he didn't say which destination is his preference (outside Utah), he did admit basketball is a pretty nice gig.

"We haven't worked a day in our lives yet," he said.

But enough about his defense.

I haven't officially announced this yet but UtesFan89 will be writing for SLC Dunk.  He's been a bloggmatic nomad and so we're happy to finally give him a home.  Thanks to him for accepting.