One other thing to note about the logo change and the new jerseys coming out; should the best happen and Deron retires as a Jazz man, his retired jersey hanging in the rafters would be with the note and not the current one.

I think the current jerseys are fine but you swap out UTAH or JAZZ from them and replace it with any other team name and they work just the same. The note has character, the current ones do not.

The other tidbit of information from yesterday was the renovation of the Jazz locker room that's going on. It will include a trophy case to house a possible Larry O'Brien trophy. While it might seem like a long ways off still, it's good to see that there is that mindset of becoming a championship-caliber team again.

I had a good meeting with good folks at Fanzz yesterday. We're going to be launching a contest in the coming days to win some of the new Jazz stuff and will have some ongoing contests/giveaways with them. The jersey t-shirts look better in person. Here's a sweet one of Matthews. 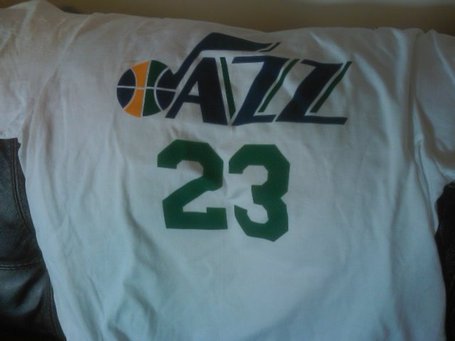 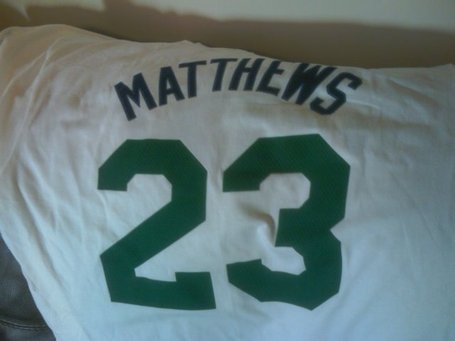 More on that coming later. They also assure me that they don't have any insider information for their decisions not to carry Boozer or Korver shirts. Obviously they're not going to order a few thousand Boozer shirts until they know he'll be back with the team. Though I'm sure they could sell out of the Korver shirts regardless of whether he signs.

However, the Matthew shirt shows that there's a strong indication that he'll be back. So while they don't have an inside track as to what the front office will be doing, you get to see capitalism at its finest.

LeBron James and Dwyane Wade might be skipping the World Championships this summer in Turkey given their free agent status. Training starts next month but unless they're signed but then, they're not going to be participating.

I wonder how this will affect Boozer playing. He's still listed on the Men's National team despite not playing much of a role in China. He's likely not going to get a contract done though until the rest of the market settles down a bit and teams have signed the bigger names. So if LeBron/Wade/Bosh don't sign for a bit, the men's team could be down a bunch of players for the Worlds.