Clark breaks down ESPN's piece (insider) about how much Carlos Boozer is going to get paid this off-season and whether he's worth it.  I've said something like this before, but I really think this is what happens,

In the end, there's a good chance someone will see Boozer as a 20-10 guy and offer him $13 million to $15 million annually to quell the public backlash after striking out on Bosh and Stoudemire. But rest assured, investing near-max money for an injury-riddled power forward with serious defensive weaknesses can have long-term, franchise-paralyzing effects.

Insert New Jersey or New York there as well.

CJ was hanging out with the Salvation Army (the militant wing) Summer Camp kids showing them his new-found skills of driving to the basket. 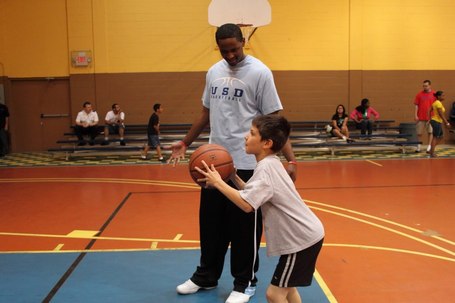 Some audio from Thursday and Friday workouts, courtesy of the Jazz

I have to say that Paul George from Fresno State would make for an interesting pick.  It's probably too high for him at #9, but his 6' 9" frame at shooting guard would give the Jazz quite a few match-up advantages.  From the Standard Examiner,

NBA decision-makers have become enamored with his agility, footwork and ability to play shooting guard at 6-9. That as much as anything explains why he is being cast as a potential lottery pick.

With all of the wing players the Jazz are bringing in, I wonder if there's any truth to Dominique Jones' statement,

I heard a rumor that they might be getting around a 20-something pick.

Maybe he was just doing a little self-promotion as he's projected to go in about the 20's?  The Jazz could do well though to draft a big man and then buy a pick later in the first round from a team with some extra picks or someone that doesn't want to pay a first-rounder.

He lists his factors that include wins, playoff series wins, All-stars, and championships among them.  One thing the Jazz get dinged for is their relocation.  If anything, the Jazz should get points for moving out of a market at the time that didn't support the team.  Granted, things looked pretty bleak in Utah as well when they first moved here but there's no question they are the team they are today because of the move.

Can't argue too much with that list.  Although the Jazz didn't get any points for intangibles that almost every other team did.  The biggest intangible?  Having two superstar players that missed relatively 0 games.