The Jazz are going to work out the following players today,

Those names aren't as big as previous players that have come in for workouts. Maybe KOC needed something to do on a Wednesday?

We talk a lot about the 9th pick but the Jazz do have a second-rounder as well. I imagine they'll be working out more players that won't be going in the lottery.

KOC stated on the radio that they're going to take the best player available to them and won't be drafting for need. So if the Jazz do draft Babbitt or Henry, the Jazz are still going to have to fill their need for defensive big man. What FAs are out there that fit the bill? 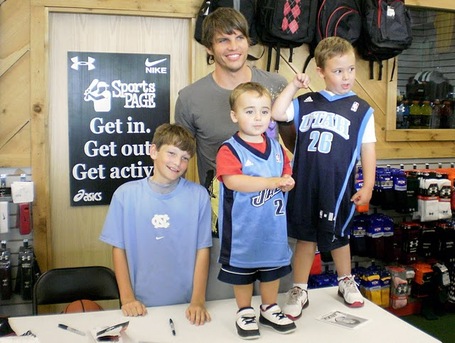 Korver was in Iowa to help raise money and had this to say about re-signing with the Jazz,

"I definitely want to hear what Utah has to say," said Korver, who’s planning to visit the Sports Page sporting goods store at roughly 7 tonight. "I’ve really enjoyed my time there — I want to hear them first. But after that, I have no idea.

"You want to be somewhere where you get to play and have a coach that (appreciates) what you do, but you also want to win. You play 82 games and you only win half of them — 41 losses is not a fun year. Being in Utah the last couple of years on winning teams, winning games in the playoffs, that’s really fun and just makes life a lot better and more enjoyable.

Kyle is going to get his pick of teams this season once the big names are signed could get a bit of a raise. He made just over $5M in 2009-10. Coming off a record-setting season, he should be getting more than that with his next deal. Will that be too much for the Jazz to offer? What's the range? $6-8M? He does put a value on winning so he might play for a little less but he could go somewhere where he can get paid and .

Boozer not going to get max money? From the Miami Herald (via BDL),

An official close to the Heat said Miami wants to pursue Carlos Boozer if it cannot get Chris Bosh (its top power forward choice), or, likely, Amare Stoudemire. Boozer would love to play here but would need to accept below his $15.8 million maximum first-year salary.

He might not get max, but he's going to get close to it. I still think that someone that misses out on the LeBron/Bosh/Wade three-headed FA monster will feel a need to use their cap space to show their fanbase that they're trying to compete and will throw a large chunk to Boozer.