I'm leading with this video made by  adijacjak (pronounced just as it looks) and stealing it from the FanPosts because you will never get this out of your head for the rest of the day and it's fantastic,

Speaking of great fan work, this is from Alexandria VA 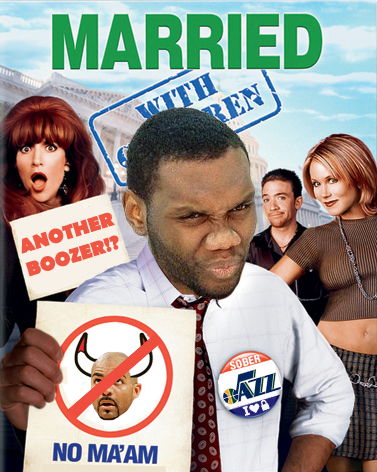 Now that Korver is with the Bulls, he (and I assume Boozer as well) is trying to recruit Ronnie B,

Speaking of Boozer, don't think he didn't have some impact as to where Korver ended up. The Bulls' major free-agent acquisition has been in constant contact with Korver over the last week, and now Korver is trying to throw on the same recruiting pitch for another former Utah teammate, Ronnie Brewer. If the Orlando Magic match the offer sheet that the Bulls gave J.J. Redick, you can bet the Bulls will go hard after Brewer.

"[Boozer] reached out to me and we talked about it for sure," Korver said. "And I was texting Ronnie Brewer earlier, so we're trying to start the Chicago Jazz here. I don't know if you knew that."

First, it looks weird for Korver holding up a Bulls jersey.  That one hurts more than seeing Boozer hold up his.  It may be though that Ronnie B is waiting to see what happens with Redick before signing.  If you're looking at the recruiting angle though, Brewer has more friends with the Jazz than he would with Chicago.

While I would welcome Ronnie B back, I don't know if he's the fix that we need, his lack of an consistent outside jumper being the biggest reason.

Where does the KOOF go from here?  It looks like he's not going to be staying in Minnesota,

David Kahn just said here in Las Vegas that he has already talked to Koufos' agent and will try to move Koufos on a team where he might play more than on a Wolves team that now has Kevin Love, Michael Beasley, Darko Milicic and soon Nikola Pekovic.

I didn't hear/read anything on why he was included since the Jazz didn't need to trade any players in the deal.  Minnesota obviously doesn't have them in their plans.  It does save the Jazz some money so that's an added bonus if O'Connor got them to take him for that.

Does he just get bought out?  I don't know what kind of asset he is for another trade.  I guess Minny could get another low second-rounder for him.  If he does get bought out, would he head to Europe?  He did have offers from several clubs when he declared for the draft.  He would likely get more money and more playing time there.

While I'm upset that we're going to be losing Matthews (98% likely), I'm even more upset that it's not going to do any damage to the Blazers.  They're going to be over the cap but paying the luxury tax is nothing for them.  For the Blazers there's no risk involved.  Unlike Maverick, Paul Allen can cash all the checks he wants.