Share All sharing options for: From reverse to 60 in about 3.4 seconds 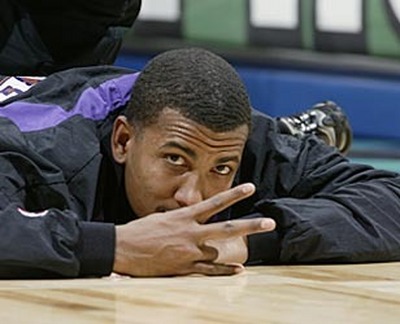 Raja Bell is showing you how many championships he believes he will win in Utah.

Last offseason, we talked about how many changes were coming and expected to see the opt out of one Carlos Boozer followed by Millsap's rise to startingdom and the front office having a little cap space to mess around with. The rest of the offseason and season we were teased with trade rumors and offers and I feel like many Jazz fans just wanted to see change, because the status quo wasn't going to get us very far (far= past the 2nd round of the playoffs).

This offseason started off with the Jazz not doing much of anything other than watching players walk out the door. I will admit that after Portland made a toxic offer: part deux to Wesley Matthews, I was feeling down about the offseason. And I am one of the Jazz fans that has wanted to see what Millsap and Fesenko could do with more touches and minutes for a season and a half. I guess I would rather see a Jazz team exceed expectations than fail to meet them, when they lose in the first or second round of the playoffs.

But in the last 2 days, that has all changed. This team can actually get the 2nd seed in the West instead of just talking about competing for it. That wasn't true the last two seasons, as much as we pretended that it was.

The significance of acquiring Al Jefferson

I am a hypocrite. I overreacted and wondered what in the hell the Jazz were thinking when the rumors about Al Jefferson surfaced. I didn't get it then. But Jefferson will be so much more than Boozer's replacement. Watch this youtube video mix of Al Jefferson highlights to understand what I am about to tell you. Jefferson is much, much longer than Carlos Boozer. Al Jefferson can play a true center in the Jazz system, while Boozer couldn't. The Jazz are going to be able to play Millsap and Jefferson together at the 4 and 5 spots and it will be their best lineup, not just a patchwork group thrown together because the team didn't have a true center.

If you watched that youtube video, you may have noticed that Jefferson plays close to the rim offensively. Almost all of his shots come within 10 feet of the basket. He can back down his man and then turn around and dunk on them. I know that highlight videos are hard to trust, because they only target the good, but just the fact that Jefferson can back down a guy like Joakim Noah or Yao Ming and dunk ON them, is impressive. If Boozer ever dunked on a real big man, he required a running start to do so. As Shums pointed out to me, "Boozer plays below the rim, Jefferson plays at the rim." And the only center that actually plays above it, is probably Dwight Howard. Jefferson and Millsap not only CAN play together, but they will be good playing together. Both crash the boards, especially offensively, and Millsap's quickness and ability to attack the rim will compliment Jefferson's true "back to the basket" game.

And that's the most genius thing about the Jazz acquiring Jefferson: it placates almost any type of Jazz fan, except for @LostTacoVendor. Go follow him on Twitter to see what I mean. If you were a Millsap fan and hated Boozer being in the way of his starting and development, then you will most likely get to see him start and get touches. And if you preferred Boozer and feel like the Jazz MUST have a 20-10 guy, then you should be satisfied with Jefferson. If it turns out that the Jazz use Jefferson as a power forward and Millsap is again pushed to the bench, it may not be for the best of the team. But I expect to see Millsap and Jefferson play a lot of minutes together like the first scenario suggests.

Two seasons after Raja Bell left Utah, the Jazz made the Western Conference Finals and were one defensive shooting guard away from competing with the San Antonio Spurs. If you remember, it was Manu Ginobili who did most of the surgical work on the Jazz's defense that playoff series, especially late in games. The Jazz had mostly a helpless Derek Fisher to throw at him. I thought back then that if the Jazz had Raja Bell, they would have a chance at being very competitive in the series, if not having a chance to win it and go to the finals.

Yesterday the Jazz found themselves in a similar situation, desperately needing a shooting guard. Deron Williams, Andrei Kirilenko, Paul Millsap and Al Jefferson make up a pretty nice starting four, but they were really missing the guy who could come in and guard a Kobe Bryant or a Brandon Roy on a nightly basis . I love CJ Miles' improvement, but he isn't a great defender yet. Wesley Matthews is that defender and outside shooter, but Portland's second toxic offer was going to pull him away. Bell is the perfect response and fits three needs for the team immediately:

1. Perimeter Defense- do you know why Kobe wanted him on the Lakers? Kobe didn't want to have to try to score on him. It's why the Lakers recruited Ron Artest the year before. I am being mostly tongue in cheek, but Bell is that tough of a defender.

3. Veteran leadership- How long have we been asking for this as Jazz fans? Since Derek Fisher left. Fisher talked about championship aspirations from day one and it rubbed off on the team. I hated Fisher at the starting shooting guard spot that year, but his toughness and "know-how" were a huge impact on the team, even if unmeasurable. Bell will have the same impact. He is very, very smart and well-spoken. When he talks and breaks down the game, it is hard not to listen to him.

I know that some Jazz fans, and especially Yucca Man were hoping that the Jazz could find a way to retain Wesley Matthews' services, but it just isn't going to happen. I was one of the Jazz fans who thought he should be the number one offseason priority, not Carlos Boozer. But in a way, I prefer Bell being here. I love Matthews and will always be one of his biggest fans, but you can only get so far with a group of all 25 and under year olds. Look at the Thunder. They are young and athletic and exciting, but they lack one more person to sort of elevate them mentally. Maybe a better example is the Trailblazers. Injury has mostly done them in the last few seasons, but many thought they would be a top 2 team in the Western Conference by now, 3 years ago. They lack veteran know how, mostly. Bell is going to give us that, along with great defense and great 3 point shooting. At least for the next 2 or so seasons, Bell is the better fit for the Jazz than Matthews. And he will cost $4 million less this year when you factor in the luxury tax.

I don't want to be blasphemous by putting this team up with any Stockton-Malone Jazz team, but overall the talent is better. And unlike the team with Boozer, Okur and Millsap as the main bigs, this is a TEAM, that fits together and has more versatility. If the Jazz resign Fesenko, they will have the starting pieces and depth. Shooters? Bell, CJ, Dwill, Okur, and Hayward can all shoot and make the 3 with consistency. Height? Okur, Jefferson and Fesenko will make up the best crop of centers the Jazz have had since Eaton wore the green, gold, and purple. The Jazz plan on bringing Fesenko back and you won't find a better backup center for cheaper money. Trust me. Length? Ak, Evans, Miles, Jefferson, and big Fess are all long. The Jazz should always have someone who can guard guys like Gasol or Kevin Durant or Lamar Odom. Leaders? Deron and Bell are going to do most of the leading along with Sloan. And if Al Jefferson is half as serious as he seems about playing for a contender, he is going to be motivated and hungry. We have depth at every position and every need filled. After we lock up Fesenko, barring some unforeseen offer from the Portland Trailblazers, we will have Deron, Bell, CJ, AK, Millsap, Jefferson, Okur, Hayward, Fesenko, and Price locked and loaded. Then we can sign Jeremy Evans, Sundiata Gaines and one more minimum contract player. Or who knows? Maybe the Jazz have one more ace up their sleeve in free agency.

The Bottom line is that this is a team that can actually, in reality, challenge for the 2nd spot in the Western Conference. At least it's more likely than the previous 4 years. And I'm not so sure they can't give the Los Angeles Lakers a run for their money. And if they can't beat them, at least they can take a forearm to their collective faces.