Extra credit reading (I can't figure out how to write stuff below the poll, so this goes at the top): This is a Deseret News article published in 2005 about what the Jazz were going to miss with Raja Bell leaving. Read it, and get excited that the man is back.

These are our new Jazzmen (so far): 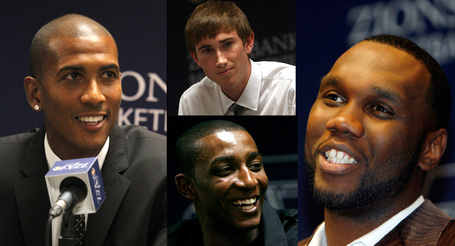 Just for fun, here are our three most senior Jazzmen--when they first arrived in Utah:

Things you don't come across every day: Greg Ostertag highlight videos. Fans tend to remember Tag's, shall we say, lack of killer instinct and workman attitude more than anything he ever did on the court. We tend to forget that he had more than decent skills for a guy his size (yes, I acknowledge that he chose to exhibit them 10 or 20 times in one game and then not again for three months). However, if we had this guy manning our middle right now... Only Greg Ostertag would have a highlight video that starts off with him yawning. :) Also, check out the AK spin-crossover-pass around the defender move around the 1:00 mark.

The uploader has created highlight videos for a number of random, obscure 90s NBA players (and, for some reason, too many to count for Richard Jefferson).

What's been your favorite and least favorite off-season change so far, whether that move is the addition OR loss of a specific player?

Many sites are reporting that Jeremy Lin is/will be the first Asian-American to ever play in the league. However, Lin is actually the second. The first (and first non-white player in the league) was Wat Misaka, who played three games for the Knicks in the 1947-1948 season before getting cut. Would you have guessed that Misaka was from Utah? Per Wikipedia, Misaka was born in Ogden, played for the University of Utah (leading Utah to the 1944 NCAA and 1947 NIT championships), and was inducted into the Utah Sports Hall of Fame in 1999. By the way, Jeremy Lin, like Raja Bell, spurned the Lakers. Just sayin'.

Friday Poll (as requested in the Comments section of yesterday's Downbeat). Dear people using the Metric system, please convert to the best of your abilities.