The Jazz weren't mentioned on John Hollinger's list of winners or losers (insider).  The Bulls and Heat are there on the winner's list of course along with Bucks, Warriors, Spurs, and Blazers.

The W's are on the list because they got new ownership.

Tiago Splitter's cheap contract and Jefferson's new tax-friendly, though bad deal is the reason why San Antonio was mentioned.  He also delves into the possibility that Jefferson opted out of his guaranteed $15M left on his deal with the wink-wink that he'd get a new deal with them.

Overpaying Matthews and getting rid of Martell Webster's contract lands Portland on the list of winners?

The Jazz certainly looked like they could have been on the losers list had they not pulled of the Jefferson trade and Bell signing.  I would put them above the W's, Spurs, and Blazers though.  This will be one of those things that is only going to be decided by playing out the season.

Meant to include this yesterday.  Great caption from docfunk, 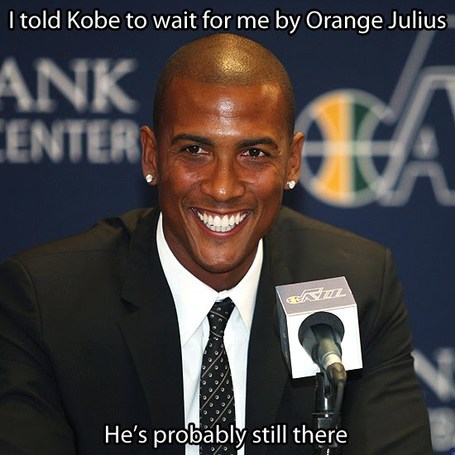 It looks like they're expecting quite a turnout for the Dodge Barrage.  So far I only have two people signed up.  We need at least 5 more and preferably 7.  Here's the form to fill out just to say that you want to join the SLC Dunk team.

I will then fill out the necessary information for the team on the Dodge Barrage website.  Registration opens on Sunday, the 1st, so get to me soon.

Here's a quote from Deron after we got swept by the Lakers,

"We're a playoff team; we're just not a championship team. We still need a couple more pieces. Until we get those pieces, we'll be hovering around the four or five seed."

Are the Jazz there yet?  If we bring back Fesenko, and let's say Gaines, then sign Evans, are we better than that 4-5 seed?

Wednesday open poll...  We have four open roster spots for the league minimum requirement.  What kind of players do we need to fill those out and who do you expect the Jazz to sign?