Al Jefferson returns to his high school in Prentiss, MS where they renamed the court after him,

[Note by Basketball John, 07/29/10 9:49 AM MDT ] Looks like UTonganKidinCali found this last night as well and posted it on a FanShot.

It's too bad that the Jazz will only play the Bulls twice next season. According to Kevin Arnovitz from TH, Chicago should run the flex given their players,

What kind of personnel are we talking about? What skills does a player need to have as part of his game to be an effective player in that system? The simplest way to define the qualities of a good flex player is the ability to multitask. In the flex, each player on the floor is a screener and a screenee, a passer and a cutter, a guy who can make plays in a variety of ways by instantaneously reading the defense. Ballstoppers and early-shot-clock freelancers need not apply.

You have Boozer and Brewer starting who obviously know the flex. Korver comes off the bench. He then explains why Noah and Deng specifically are perfect for the flex. Rose should fit in with it as well.

If Corbin was there, there's no doubt that's what would be run. It would be interesting to see the Bizarro Jazz run the flex against their former teammates. It's almost like the training camp scrimmage as Boozer/Brewer/Korver on one team with Millsap/Bell/CJ on the other. Put in Deron/Rose and Jefferson/Noah and you're all set.

When the schedule comes out next week, those will be the first games I'm looking for.

So after a losers and winners column, Hollinger put up an off-season survivors (insider) spot,

The Jazz, however, put themselves arguably in better position than they were last season with a couple of brilliant saves. First, they executed a trade for Minnesota big man Al Jefferson that cost them relative peanuts. Jefferson not only fills Boozer's position, it also shores up a potential hole left by Mehmet Okur (Achilles injury) and allows Paul Millsap to move to a starting gig at power forward.

On the wings, the Jazz drafted Gordon Hayward and signed veteran wing (and one-time Jazz) Raja Bell to a three-year deal. It's unlikely that they'll replace the production that Korver and Matthews delivered last season, but they cost a fraction of the money and allow the Jazz to stay competitive without a burdensome payroll. As a result, Utah sidestepped a potentially ravaging summer and is in good position to make further upgrades once Andrei Kirilenko's $17 million anchor comes off the cap after next season.

I think Bell and Al will replace the production that Matthews and Boozer did. Hayward won't shoot 50% from three but could be a benefactor of the elbow jumper that KK and Harpring had. We didn't expect Matthews to even make the team last season at this point in the year, let alone start, so it's not out of the realm of possibilities for Hayward to be a contributor off the bench.

I like the facade of the new Jazz season ticket holder club that's being built at the ESA. I won't see the inside for a while though. 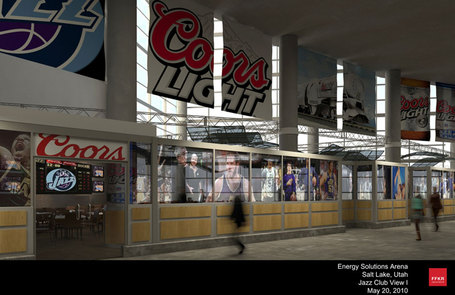 They're also going to be expanding the Fanzz store on the main floor which is a welcome addition. If you've ever been in there, it's pretty tight and not the good tight.