Good to see the Golden Griff. My earliest recollections as a Jazz fan were of him and the rainbow-arching three in addition to the dunks.

I'll be at the Fan Fest tonight, tweeting away. Anyone have any leaks of the jerseys yet?

I'll be a writing a bit more on it (couldn't watch it live), but this tweet from FreeDarko nails it,

This is like if you took Jordan's speech and turned it inside out.

Great exchange between a fan and Karl Malone at the HOF weekend,

We mostly left the celebrities alone, but damn, Karl Malone: 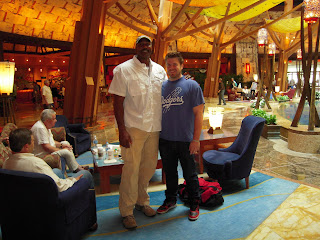 He ended up being insanely nice. And weirdly funny. Here's the exchange between Ben and him:

"Mr. Malone, I know you're probably tired of signing autographs, and I apologize for not being 8-years-old, but is there any way I could take a picture with you?"
"Sure. Just don't stand behind me. That's how Jesse James got shot."
"I wouldn't dream of it. I don't have a gun."
"You don't?" (pats pant leg, smiling) "I do."

We're 99% sure he was kidding, but that dude who looks like Chuck Daly was definitely packing heat.

So is Jordan being the focal-point of NBA2K11 (including the cover), going to preclude you from buying it? The Jazz obviously show up in a many of his career moments that you'll be able to play as him. My question is, can you play the opposition and try to stop him? Can we put refs in that will call a push-off?