Small Recap From Fan Fest And The Jersey Unveiling

Share All sharing options for: Small Recap From Fan Fest And The Jersey Unveiling

Head to the SLC Dunk fan page on Facebook for more pics. There are 49 more there with some comments. I would have put them here, but the SBN uploader only allows one at a time.

Good time at the Fan Fest tonight. It did seem a bit like the HSN with the players walking the runway and Bolerjack/Rigby selling season ticket packages and paraphernalia. They had David Locke, Alema Harrington, the Jazz dancers, and kids from the Junior Jazz peddling various wares. Get out and support your luxury tax-paying team!

The Golden Griff looked like he could still be playing. He's in as good of shape now as he was when he was with the team.

Al Jefferson got the biggest cheers of the night. He seemed genuinely surprised that he would get that kind of ovation. The Jazz though may want to consider lifting the headband ban for Al. The dude was sweating like mad just standing at the end of the runway. Given, it was still 100 degrees outside, but there is some precedent for him. How has he played basketball so far in his career without one? I'm sure that letting him wear one would add 5 & 2 to his game. We should also nickname him Keith. I'm not sure how many will get that.

Lots of mixed reaction on the jerseys. They were selling pretty well as evidenced by the long line but there are some that didn't like the road jersey. 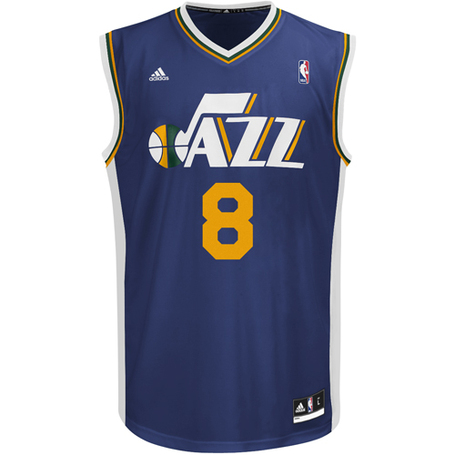 I don't know if I would have liked the green as the primary color on that though so I'm not sure what they could have done with it otherwise since they weren't going to use purple. It might be the trim that's a bit much.

The home jerseys were a lot better received, 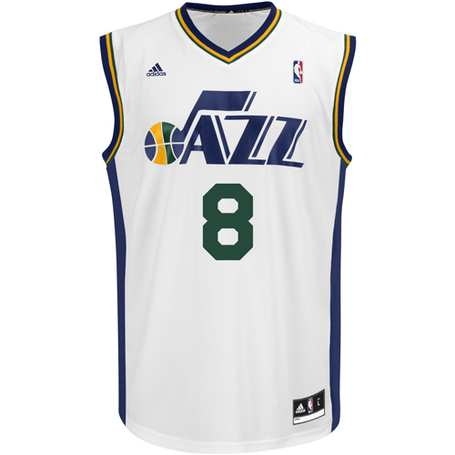 I'm not sure where I got that the word UTAH was listed above the note when I saw them putting them up behind the black tarp. It's not there obviously. Maybe I was just seeing things because I was sure they would see me typing furiously on my phone. I'm not sure that I like the green numbers either on the home jerseys.

The anti-climatic finale occurred when they announced that they were going to be dropping a new banner off the side of the ESA. It was anti-climactic because everyone moved over to the NE corner of the ESA and then we had to have 3-4 restarts of a countdown to unveil the thing. When they finally got it to work, it was a pic of Bell, Millsap, and Jefferson all in the new jerseys (on the FB page). There wasn't even a mild roar. After standing in the rose bushes below the ESA for 10 minutes waiting, everyone realized that it was pretty much like every other banner that had hung from the ESA.

So training camp is now a day closer but we're still not going to be hearing basketball for 1 1/2 months or so. We might hear who's going to training camp or maybe a signing or two, but that's about it.

So make sure to peruse the photos on Facebook. Maybe if you use the Great Brain (at the academy) method and look at just one picture a day, it will take you right up until the start of the season.