Not sure how I feel about this,

For the 2010-11 season, the Jazz are one of three NBA teams (the Rockets and the Hawks being the others) that will use a computer program in an attempt to quantify the value of each game and then price the tickets accordingly.

The "dynamic pricing solution" software program, developed by Ocue out of Austin, Texas, will be used to determine the optimal price for each ticket based on numerous factors and algorithms such as opponents, day of the week, playoff implications, and even weather and other market conditions

My first thoughts are that if you have to spin things, it's not a good thing for the fans.  Simply put, others are making money off of higher-profile games by getting the tickets at face value and charging more for them through various outlets and the Jazz want a piece of that pie.  It does give the team more revenue and in turn that helps to field a more competitive team.

I don't think that overall the fans are going to like this.  Most feel that they're already priced out of taking the family to an NBA game, though the Jazz do sport some of the cheapest tickets in the league and haven't had a significant ticket price increase for a while.

On the other hand, I also hate it when ticket brokers buy up all of the tickets and inflate the prices to those high profile games as well.  So who would you rather be paying that premium to?

The only other issue I have is if what if you're paying for a high profile game like the Lakers, Heat, etc. and Kobe is taking the night off?  Are you going to get a refund for the difference?  Not likely.  Although if Laker fans are paying out the nose for tickets and can't see their boy, that's fine by me.

We'll likely learn more about which games are premium and their pricing structure after the schedule is released.

Sorry, this headline made me cringe a bit, especially when combined with this quote from Layden,

When he first came to us, he wasn't a very good free-throw shooter and he became one of the best, especially in the clutch,

While that's mostly true, it just brings back memories of a painful Sunday.

No news on Fess yet but he's throwing down some sweet dunks, 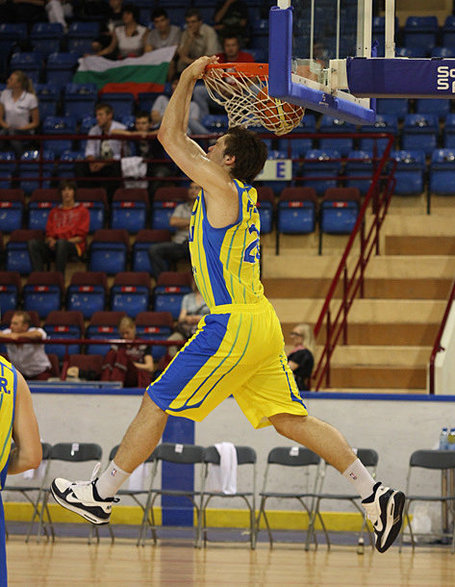 Also check out this before and after dunk.  The Ukrainian Jordan.

We have our SLC Dunk Dodge Barrage team.  The name that was suggested was Boom Beaches (since we can't have profanity in the names).  Thoughts?  Any designers want to smash up a logo for our unis?  I thought about trying to get some cheap KOOF jerseys/shirts but everyone has to have a different number.

According to Korver's site, there's supposed to be some new videos coming out soon to promote.  I'm looking forward to this.  It will be a good bridge to the pre-season.

This has nothing to do with the Jazz at all but it's a good start to the work week.  For the two of you that haven't seen this, prepare yourselves.  Your life won't be the same.  I don't know if this is the worst thing ever or the greatest thing ever.  The greatorst thing ever?  I could be incorporating this into my game recaps for the upcoming season.