This isn't the only time Stack has fought with a member of the Jazz.  He and Kirk Snyder got into it after a Jazz loss in Dallas back in 2005.  Stackhouse has a rep of getting into altercations with other teams as well.

Sounds like Andy (Hayward) will be heading back to Utah this weekend to start working out.  CJ said the first part of September is when he would be back as well.  I imagine that everyone else will be filing back in to town as well shortly.  We're getting closer.

Deron Williams may very well end up leaving in a couple of years, but not for any of the reasons listed by this Dime post.  Here's a list of the reasons given and my counter argument.

Overall, this looks like an article that some wrote because 1., Deron could be a FA in 2012, and 2., made the Dallas connection.
The biggest factor to me why this wouldn't happen would be that Dallas will be over whatever the cap is in 2012 with Cuban doling out huge contracts trying to build a winner.  If he's going to start dumping salary to get under the cap then they're not going to have much of a team to go to.

HoopsHype is reporting that free agent Francicso Elson is leaning  towards signing with the Jazz, 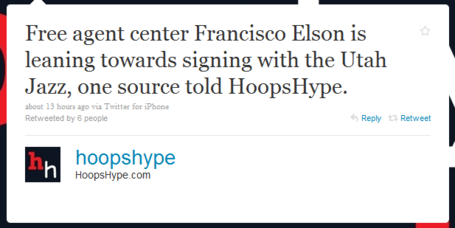 If you're like me, I'm sure you said, "Fransicwho?"  He's a journeyman right now with unimpressive numbers for a big man.  He's a 34-year old 7-footer who doesn't score much nor blocks many shots.

There will be rumors like this that float around, but if they were to sign him, wouldn't that have an impact on Fesenko and Jeremy Evans?

Open-ended Wednesday poll...  Who is the team's most-improved for next season?