One of the big reasons why I think Boozer never endeared himself to Jazz fans were that his interviews and such seemed to be no more human than what Cleverbot spits out. When asked by ESPN what his goal was for the coming season, he replied, "A championship." He then goes on to give the following,

With our combination of what we have on our team, with myself in the post, with D. Rose at the point guard spot, Joakim [Noah] plugging that middle up, Luol Deng being very versatile on the wing, I think we have a team that can rival anybody. I think we'll be able to compete against every team in the league.

That should sound familiar because it sounds just like everything he's said while he was with the Jazz. He told the DesNews when he signed that his goal with the Jazz was a championship. If I had dug up the following quote, it would sound just like Boozer,

With our combination of what we have on our team, with myself in the post, with D. Will at the point guard spot, Memo plugging that middle up, Ronnie Brewer being very versatile on the wing, I think we have a team that can rival anybody. I think we'll be able to compete against every team in the league.

I don't expect him to not have his goal as winning a title and not competing against every team in the league. It always seemed that he would input questions, run it through some sort of algorithm based on what he thought the person wanted to hear, and spit back out an appropriate response.

I'm looking forward to the honest opinions and talk we'll get from Big Al.

In case you haven't read the AK interview posted as a FanShot, here's my favorite quote from that story. When asked about whether the Jazz wanted him to stay out of the FIBA tourney, he replied,

Incidentally, none of the NBA club is unable to prevent basketballer to play for the team. So it is entirely my decision. But we must take into account: "Utah" gave me all the things you can only dream of. Many readers might think: in the "Jazz", they say, gathered by the bourgeoisie and the capitalists who are not interested in anything except money. (Laughs) Of course, the money they are interested.

It's best read in a broken Russian accent voice. If "Let's play the basketball" ever gets retired, "Jazz... capitalists who are not interested in anything except money. (Laughs)" might be the new tagline.

Here's our logo for the Dodge Barrage 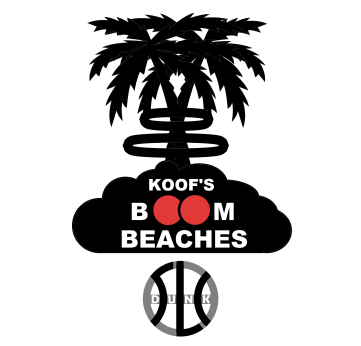 We used beaches because you can't have any swears in your team name. The palm trees are for the beach and the nuclear cloud for the boom. Thanks to Kurt for the idea for the BOOM.

You gotta get out on that,

Thursday poll. The Bulls finished 41-41 last season but added Boozer, Korver, and Brewer to their lineup. They'll improve on that record. Last season, the Jazz finished 53-29. They lost Boozer, Korver, and Matthews. The west is also a tougher conference during the regular season. Given that, who will win more games this season? Leave your win total predictions in the comments.