Trade Rumors - Andrei Kirilenko To The Denver Freaking Nuggets As Part Of The Carmelo Anthony Trade?

Share All sharing options for: Trade Rumors - Andrei Kirilenko To The Denver Freaking Nuggets As Part Of The Carmelo Anthony Trade? 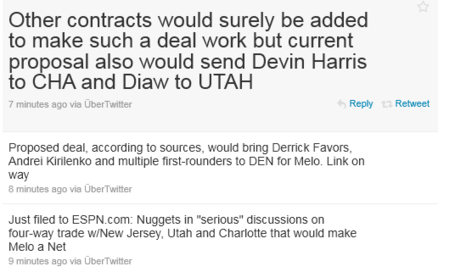 No, no, and please no. These discussions could go nowhere but it kills me that this would even be on the table. Should make for a great media day on Monday.

If this did go down, the only reason the Jazz would do this trade would be for a straight salary dump. AK makes $18M, Boris Diaw makes $9M. There's no reason to do a AK/Diaw swap for basketball reasons. None. The fact that he would be traded to a division rival would be a double stomach-punch. One to drop you and one once you're on the ground. Kick a little dirt in your face and you would be done.

Not to mention that Denver would be getting huge cap relief next season. Diaw still has another $9M owed for 2011-12.

There's obviously a lot more details to come and this could just be a lot of smoke, but the fact that this it out there kills me.