Share All sharing options for: Instead of #LetThemPlay, Let's Go With #DontScrewTheFans - The Downbeat - #594

Should the league and the players not come to an agreement today, David Stern will cancel the first two weeks of the season.  Nobody is hoping for this but the owners and players have stated that it might come to that in order to get what each side considers a fair deal.

If we are to lose games, and it ends up only being the first two weeks of the season, would it be that terrible for the Jazz as a team?  November is a harsh month for Utah with only 6 of its 15 games at home.  Assuming the all games through November 13 get the ax, the Jazz will miss 7 games.  The first two games are at home against Houston and Memphis.  Then they hit their five-game, east-coast road swing early where they would have two back-to-backs and four games in five nights.

With those games missed, they would avoid road games in Houston, Miami, Orlando, Atlanta, and Charlotte.  Again, I'm not hoping for missed games.  I would rather see seven games and seven losses for the Jazz than none at all.  But if the Jazz are going to miss games, the only ones that really affect anything are the two games against Houston and the second game against Memphis.  Those are weighed a little more heavily when it comes to tiebreakers.  Of course, the league could decide to cancel the first two weeks of the season yet still play a compressed 82 games schedule given that if the first two weeks are cancelled, teams will not have had played the same amount of games.

Hopefully this will all be a moot point and the two sides will come to their senses and get things worked out today after meeting for an emergency meeting yesterday for over five hours.  As Matt Moore shows here though, there's a lot that has to happen.  The basics of the deal and the framework would have to be agreed upon today in order for games to be salvaged.  We may just be at a point where we've run out of time and missing games is inevitable.

Enes Kanter will finally get his chance to play for Kentucky.  He may not have been eligible to play NCAA basketball, but they're having him back in their annual Big Blue All-stars vs. Villians (North Carolina/Duke) game:

"I have a very special announcement that just developed," [organizer Jeff] Sheppard said. "We have an addition to the Big Blue All-Stars. I'm so excited to announce that he's going to be playing for us because unfortunately this year he was not able to wear the blue and white and represent the University of Kentucky."

And so for the first time playing on Rupp Arena's floor, Enes Kanter will play for the Big Blue All-Stars. (That's) as good as we could do. We're super excited to have him on our team."

All of this of course is contingent on the players still being locked out.

Gordon Hayward has had a few nicknames: G-Time, Flash, OG-Time, etc.  After his time at IPL3 for his Starcraft II tournament, we might need to add another.  Any that you can come up with with this pic of him showing off the 3D glasses? 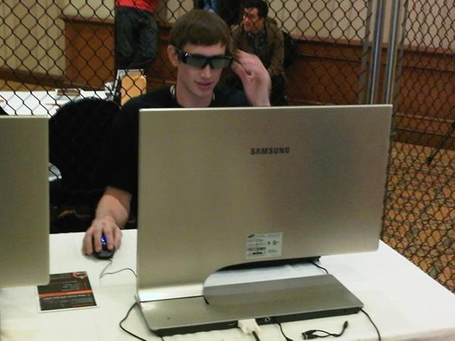 An interesting note from Tyrone Corbin from Jody Genessy on his coaching philosophy when it come to specialization:

Corbin said it's possible the Jazz might add another coach to the staff, although he didn't give details as to whether he'd be full-time or have an emphasis on a specific position.

Corbin also said he isn't going to give his assistants specific assignments to begin with, meaning Lowe, a former NBA point guard, will be working with Devin Harris as well as new center Enes Kanter, etc. Same for Layden and Hornacek, who's been Utah's part-time shooting coach since 2007.

"Everybody's coaching. Nobody's a defensive specialist - nobody's an offensive (specialist)," Corbin said. "We're all coaching everything on the floor, and we have all the responsibilities.

"Right now, we all have to coach. We have to coach both sides of the floor," said Corbin, who was Sloan's assistant for seven years prior to becoming his successor. "We have to coach big guys and small guys at times. But we have to get these guys better ... wherever that is."

That doesn't mean that specialization won't happen down the road.  Just as Corbin will be evaluating players when things resume, he'll be evaluating coaches to see what their strengths are.  Before he was named an assistant coach, Hornacek was primarily a shooting coach and has helped improve many players.  With the gifted big men the team had, I think a low-post coach would make