Tonight would have been the first home game of the pre-season against the Oklahoma City Thunder. Of course there's a minor quarrel going on right now which means the earliest we would see the Jazz in action would be Friday, November 18th against the Clippers.

The Jazz have had eight (not seven like I said last time) games cancelled so far. There has been so little movement from either side and a seemingly renewed determination on both sides to get a respective fair deal, that further cancellations seem inevitable. Stern has said that they would come in two-week increments. So if the 14th of November was the first chunk, then I'm assuming the rest of November would be on the block next. That's an additional seven games missed for the Jazz and nearly 20% of the season wiped off the books.

If all we lose are November games, then what happens with the uneven amount of games lost for teams? Not everyone will have lost the same number of at that point. Do they forward everyone's games so that everyone is at the highest number? With the complexity of the schedule though, I don't see how you can do that given that cancelling one team's game would increase the number of another team's lost games. There might have to be a complete re-work of the schedule up to the All-star break if we resume play. When you factor in the other commitments that arenas have, it will get messy.

As I mentioned earlier this summer, I think the signs have been there are along that suggest we were going to miss games. And as we can see from recent meetings, neither side is willing to make any concessions and won't until they're under more pressure to do so. With the games lost, both sides are losing money. However, they've both stated that they're willing to do so to get what they want.

What will finally get one side to cave? Missing paychecks? A lost season?

Gordon Hayward's dad weighs in on the lockout. Guess what side he's on?

22 hours ago via web · powered by @socialditto

One of the things that we've learned from the talks is that the owners want to make changes to the luxury tax system (one of the system issues) by imposing even greater penalties for going over the luxury cap. Right now it's a dollar for dollar penalty plus whatever you lose from revenue sharing. The Jazz have paid this the past two seasons despite not getting a good return on their investment. Larry H. Miller vowed to never go over that cap while Greg Miller has shown he's willing to do it if it can put the team in contention.

Under the new proposal as outlined by Zach Lowe from SI, shows the tiered system the owners want and how in effect creates a hard cap. Would the Jazz, one of the small market teams in the league, have ventured over the cap if this proposed system was in place? Let's look at the numbers.

So they would have paid out $4.1 million more in penalty payments in addition to losing revenue sharing. Would that have prevented them from using the traded player exception on Al Jefferson?

I don't know how this helps level the playing field. Large-market teams could still more easily afford to take luxury tax hits. The Jazz would stand to reap more in revenue sharing. It still seems like a hard cap. The penalties don't stop there either according to Lowe:

And the poker gets even hotter. As Yahoo! Sports' Adrian Wojnarowski reported late Monday, the proposal would penalize teams that pay the tax in more than two seasons during any five-season stretch. That penalty is harsh, according to a source familiar with the matter. If a team has gotten into tax territory, say, twice over the preceding four seasons and finds itself over the tax line a third time, the penalty triples in each spending range. In other words, that $1.75-to-1 ratio that kicks off the tax in Year 1 would jump to $5.25-to-1 for a team paying the tax a third time.

Given that the Jazz have gone over the cap in the past two seasons, a third time would be even more penalizing. That could lead to more salary dumps as the team would struggle to get under the cap.

The team has $57 million committed to salaries next season. After signing their two first-round picks and a couple of free agents, the Jazz will be close to that $70 million cap. This wouldn't be applied retroactively of course, but you could see what impact it would have on bringing in high-salary players.

moni has a bunch of updates Jazz-wise (as you might assume). One of those things is this map from ESPN showing just who's upset about the first two weeks of the regular season being cancelled, 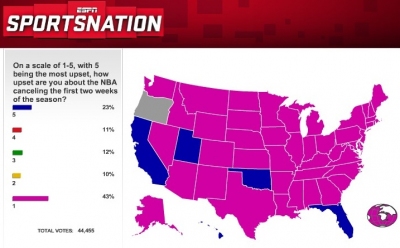 There are some interesting results from that map (link to ESPN map). Utah has the highest percentage of 5 votes with 39%. The others are as follows: OK - 38%, CA - 36%, FL - 36%, HI - 32%. For Utah and OK, the NBA franchises are the biggest professional sports clubs in the state. So our fury is a little more understandable.

What's funny is that all of the states are either outraged or apathetic about the whole thing. Florida has a huge swing with 36% registering a 5 while 33% voted 1. There's not much middle ground here. The world vote has a 30/37 split. That seems to speak a lot as to the fans of the sport. If you had such a poll for the NFL, I'm sure the outrage would have been much higher. NBA fans are either a passionate or a "catch you after football" bunch.

Wednesday poll... I'm going to duplicate Jody Genessy's poll from yesterday. We get a little bit different readership here than on the main DesNews website. I don't know if results would be dramatically different (and by comments I'm guessing not).

And since there was nothing posted for the DB yesterday, I've got some more random content after the jump.

even while playing in moscow, andrei kirilenko still rocking those nba roots:

'Road' to NBA labor deal hits unnecessary speed bump - NBA - CBSSports.com Basketball
League negotiators insisted that the 50-50 split they were trying to sell to ownership was not one of those car dealership ploys -- accept it today and drive it away, otherwise it's no way, José. Asked if the league was leaving the talks last Tuesday having gone back to its previous offer of 47 percent for the players, Stern replied, "Back-schmack." "You know, we're not ... we're ready to meet and discuss any subject anyone wants to talk about," Stern said. "We'd like not to lose the first two weeks of the season, but it doesn't look good."

Lockout or No Lockout, a Shorter N.B.A. Schedule Makes Sense - NYTimes.com
Six to eight games have already been trimmed from each N.B.A. team’s schedule because of the lockout. Would a few more cancellations be such a tragedy? Nearly every sports season is a physical and emotional grind — a marathon for players and fans. The 30 N.B.A. teams each play 82 games from mid-fall through early spring — and 16 of them make the playoffs, leaching some significance out of the regular season. Why not play fewer games? A lockout shouldn’t be the only reason to reduce a bloated schedule. Sanity might be. “Seventy would be great,” said Jeff Van Gundy, the ESPN/ABC analyst who coached the Knicks during the 1998-99 season, which was shrunk to 50 games by a lockout. “But only if you stretched them out over the same amount of time as the 82-game season. That would eliminate almost every back-to-back situation.”

Tough talk misses the point - TrueHoop Blog - ESPN
Who will concede? The easy answer is the players, for whom the passage of time inflicts more obvious financial pain. They make about two billion, with a “B,” in salaries per season. In two-week chunks, until somebody caves, that’s all gone. Forever. Money lost to canceled games will never come back. Ouch. The normal bet, then, is that players will do most of the conceding. That assumption is frustrated by some recent realities, however.

The Point Forward » Posts Key points as full season falls by the wayside «
You might wonder why either side cares so much about system issues, since the next CBA, like its dead predecessor, will divide income between players and owners based on a set percentage. In other words, make all the cap and tax rules you like, but if the deal calls for players to receive 50 percent of basketball-related income, they’re going to receive 50 percent of that money, regardless of what their listed salaries say. I’ve addressed in detail why players care about the system issues despite this percentage setup. In their view — and the views of their agents and attorneys — a hard cap or something approximating it will kill guaranteed long-term contracts for middle-class veteran players. The players as a whole might be guaranteed that set percentage of revenues, but that money would be distributed differently, with stars getting more, rookies getting whatever the rules allow and the middle-rung veterans scrapping for leftovers on short-term deals.

David Stern Wields NBA Lockout Like A Weapon, Treats Fans Like Fools - SBNation.com
It's no surprise that Stern came out aiming to frame the issue -- this is what men in power do, they spin like Techs; this is basically the job of a high-powered lawyer -- but the way he ended up doing it was, well, nasty. He said that the owners made "concession after concession" in the talks. This bugs me so, so much. The concessions Stern cites? They were willing to keep guaranteed contracts alive, willing to drop their push for rollbacks on existing contracts and abandoned the hard salary cap concept. How generous of the owners to drop three demands that they created themselves in these very negotiations! This is like a 6-year-old demanding three cookies, a bowl of ice cream and a bag of M&Ms. "OK, we'll make a concession on the M&Ms, I'll take three cookies and some ice cream. Hey, I made a concession!" It doesn't work that way. One side is not allowed to "invent" a compromise from the start and claim it has negotiated in good faith to get there.

The tax proposal the players hate - TrueHoop Blog - ESPN
There's a reason players are open to milder luxury tax, however: It's a way for James Dolan and Jerry Buss to pay more than their fair share of player salaries. Luxury tax is a way to, in effect, get Jim Dolan's Knicks to pay for Michael Heisley's Grizzlies to sign players. A little bit of that brand of revenue sharing could make a better market for players.