Will NBA Mediation Be Successful? - The Downbeat - #597

Share All sharing options for: Will NBA Mediation Be Successful? - The Downbeat - #597

After Monday's meeting between the owners and players ended with no movement and the first two weeks of the regular season being cancelled, it didn't appear that the two sides were going to meet for a while.  However, it looks like they will meet next week in mediation starting Tuesday with George Cohen, the Director of the Federal Mediation and Conciliation Service.   One of its major roles is to help mediate labor disputes in the country.

Cohen has mediated with all of the major US professional sports leagues.  He recently worked with the NFL in their labor dispute.  Before that he met with both parties in the MLS conflict in 2010.  He had three such mediation sessions with the NHL and its player back in 2005.  He also argued on behalf of the MLB players in 1994 when they went on strike.

So what's mediation?  First, it's non-binding.  He can help to two sides come together but he has no power to enforce things.  It's not arbitration as stated by Lester Munson of ESPN,

First, as all mediators tell everyone in the first meeting, mediation is not arbitration. An arbitrator has the power to make a decision that ends a dispute and binds everyone to its terms. When an arbitrator looks at all the evidence and decides that, say, a shortstop's salary will be $8 million, that's it. It is the end of the discussion. Both sides are bound to accept the arbitrator's decision, whether they like it or not.

A big part of Cohen's strategy as a mediator is to limit communication outside of the meetings.  When he facilitated the NFL talks, he imposed a strict policy against making public comments.  So whatever happens on Tuesday will likely remain behind closed doors.  There won't be any leaks if they want Cohen to continue as mediator.

Because he has no decision-making power, the talks don't offer a guaranteed solution.  With the NHL, he met with them three times only to have the season cancelled.  His role will be to help both sides see where there is common ground and perhaps offer other possible solutions that they might be overlooking.

So while this doesn't guarantee that we'll get a resolution soon, it's much better than waiting around until the middle of November for their next meeting.  However, it also shows that they are still so far apart that they feel the need to bring in a third part to help bridge the "gulf" that David Stern described.

Mehmet Okur spoke yesterday on his upcoming season with Turkish Telecom Basketball, Enes Kanter, and Deron Williams.  Everything is through Google translate:

At the moment, I feel good. I slowly began to work about 2 and a half 3 months ago. I was not at the top level will play a lot of matches. I came to this tournament than myself. There were shortcomings in the last tournament played in Ankara. Currently on my face closer percent. I feel good. God willing, I would like to play for the national team as long as I'm healthy.

Anas, I liked it very much. Although I've never tanışmamamıza, I am very positive about things. Both in the field, and off-site, resulting in the young.Of course, he performed very well. Although the upper level of the first European Championship matches, plus the 2 years, 3 years oynayamaması basketball ... I saw a very ready. Hopefully after this Lockout Utah Jazz come together to encourage the good fight. Now falls to me to do abilik, both on-site and off-site. I will do my best to him.

On how long he wants to play:

His first game is October 15th.

Dan Feldman of Basketball Prospectus lists his best and worst logos for each year in the NBA.  The Jazz make the list just once -- after Seattle changed their logo and right before Utah went to the mountain logo in 1996.  I still don't like that copper mountain logo to this day.  It was made only marginally better when they went away from the copper and turquoise to the baby blue and dark blue.  Even then there was nothing special about the logo.  Each change represented a change in the direction of the franchise, but the original note should have never gone away.

Now that it's back, it shouldn't change ever again.  Even now, the mountain logo with the updated color scheme is still considered the primary logo given the expense involved in changing that.  The note is technically the secondary logo.

The Pistons went back to their basketball logo after going with the atrocious horse head.  The Warriors have probably my second-favorite logo in the league after incorporating the Oakland bridge back into their design.  maybe it's because it's what I grew up knowing, but I prefer almost all of the old logos over the most recent ones.

Last image of Hayward from his Starcraft play courtesy of IPL.  My question is he playing Starcraft or DJing? 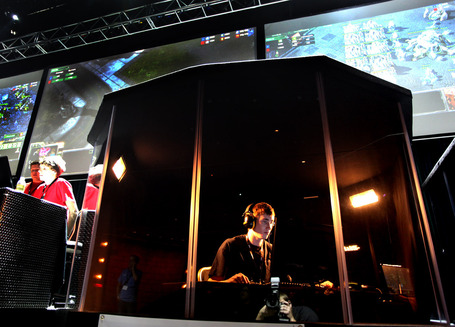 GTime ended up taking his first match in the qualifying round before falling to KawaiiRice in the second round.