Could A Justin Bieber/ Gordon Hayard Collaboration Be On The Way? - The Downbeat - #602

Share All sharing options for: Could A Justin Bieber/ Gordon Hayard Collaboration Be On The Way? - The Downbeat - #602

Should the season not get shot to hell and throw the draft next year into chaos, we'll need to keep an eye on potential picks this season. You could get all too familiar with them if there's no season.  One of the guys that a few of you have talked about is the PG from Texas.  Chad Ford (Insider) has more on him,

This year's draft might be the weakest we've seen in years at the point guard position. Only two point guards are in serious contention for a lottery pick -- Kabongo and Kentucky freshman Marquis Teague. Teague is a super athletic slasher. Kabongo is a pure, unselfish point guard who makes everyone around him better.

Kobongo's lack of size and lack of a great surrounding class in Texas this year are knocks against him. But NBA teams need point guards every year and pure point guards with very few weaknesses are very hard to come by.

Point guard is the last position we're lacking in regards to the youth-movement overhaul of the roster.  Brandon Knight and Kemba Walker were possibilities in last year's draft.

Devin Harris is no slouch and may be the better option to lead a young team than a rookie or second-year PG.  Harris's contract runs through 2013 which would be the end of the third year for Derrick Favors and Gordon Hayward.  The fourth year is when they should start hitting their stride.  Do you want a sophomore running the team at that point?  Would that set team development back?

Lockout or not, with potentially two picks coming up next year, start watching college players this fall.

So it wasn't a two-hour meeting (8.5), but some details are still leaking out despite the gag order from George Cohen.  From Adrian Wojnarowski,

The NBA and Players Association have made progress on the proposed revenue split between owners and players, an important element in settling a new collective bargaining agreement and ending the lockout, league sources involved in the ongoing labor negotiations told Yahoo! Sports.

As long expected, the two sides have moved closer to a "50-50 split, give or take a point with ranges based on revenue performance," one source said.

I know many of you skip right to the next DB item whenever you see lockout quotes/news.  This could be significant though.  The players have wanted a split in the 50-53 range.  This certainly fits.  However, if they're going to give up three percentage points (about $120 million), then they're going to want other concessions.  Alan Hahn of Newsday tweeted that he was told the revenue sharing plan could be a "'linchpin'" to the BRI split.    If a revenue sharing plan is written into the CBA, he continues, then that could move the players closer to that 50/50 split.

I'm still pessimistic that we don't lose more games.  But the fact that no more games have been cancelled yet has to be good news.  Stern had threatened he could cancel all games through Christmas should the two sides not make progress as of Tuesday.  They're also still meeting and rescheduling the owners' meetings this week to accommodate the mediation negotiations.

We had the makeup video yesterday for Hayward.  Today, his girl calls him out on twitter for following Justin Bieber (pro tip, do not mention Bieber on twitter unless you want 100 spam bots replying).  So anyone going as Hayward dressed up as Bieber for Halloween?

20 minutes ago via web · powered by @socialditto 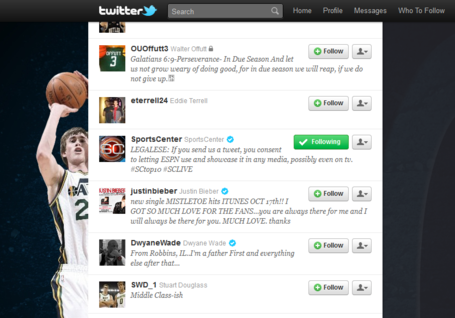 Looks like Jarron Collins is heading to China (via moni).

@jarronctwin
jarron collinsyo @JaredDudley619 your boy JC is headed to China tomorrow. the flop game is going global! It's about to be real serious.

1 day ago via web · powered by @socialditto

He just signed up for twitter and isn't verified yet so take it for what it's worth.  Maybe someone could throw him a Stanford question that only alumni might know?  His back and forth with people he supposedly knows though seems to be genuine as opposed to fake twitter accounts begging for real players to follow him.  He's already had some adventure though as his plane had to make an emergency stop in Hawaii for a man with chest pains.  He should be touching down on the mainland anytime now.

Instead of planking, I hope Collins develops a series of flopping shots while in China.  Flopping when the Great Wall hits him or when someone 1/3 his size bumps into him.

No word on whether Jerry Sloan has now come out of retirement to coach Collins.

The second version of the SB Nation iPhone app should be hitting your update queue in the next several days as soon as Apple approves it.  Some updates:

Finally, for you Android users, that app is scheduled to be out by the holidays.  It will have all of the same features.  Now you know what you can get everyone for gifts.  Just steal their phones, load the SBN app, and surprise them!  It has a little more value than donating in their name to the Human Fund.