Well, that went well. After it looked like maybe there was a smidgen of progress in the mediation sessions this week, things took a Karl Malone 360 with talks breaking off and a press conference from Derek Fisher where he said the owners had lied to them [the press]. 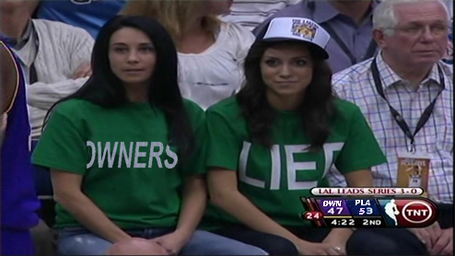 Blazers owner Paul Allen and Cavs owner Dan Gilbert were both part of the negotiations today wherein Allen gave the players a 50/50 ultimatum. Michael Lee quoted a source that stated Peter Holt, owner of the Spurs, told the players, "You haven't felt enough pain yet."

I don't know where to go with this news. We've had good news previously as well and then had everything go to hell. We've had bad news only to have something good come up the next day. It does look like we'll get more cancelled games though given yesterday's events.

Whatever side you're on, this is bad, bad for basketball. That's the side we're all on of course. I'm just tired of it So I'm going to drop lockout talk from the DB. It makes things a little bit tougher in regards to content, but there has to be something else to talk about. If you want to follow the lockout, I'm sure you can find it. This infographic needs a nuclear cloud added to it for October 20.

If you want to read more, Ken Berger's latest pretty much sums it up perfectly. This lockout has stripped whatever aura of sanctity I had left of the league.

We won't be completely barren of Jazz basketball next month. Diana Allen is reporting that KJZZ will begin broadcasting old Jazz games starting November 2nd. I've been a proponent of this for a long time. It won't be 24/7 as that probably wouldn't be too profitable but I'll take it. Add in the fact that Sloan, Johnson, and players will be adding commentary and I'm hooked.

Interesting quote from Deron Williams on his blog,

This is my first year playing international ball, so I'm still just trying to figure everything out with regard to my role. Obviously I've played in the Olympics with the same style of play, but that was still different because all of my teammates were American. They've actually been playing me at the two guard a lot here. Whatever I can do to help the team, I'm willing. I don't have any personal goals or stats I'm looking for over here; I just want to stay in shape, play basketball and have fun. As a team, we just want to win as many games as possible, win the Turkish League and now the Euro Challenge. I don't know how many of those games I'll have a chance to be a part of, but for every game I am here for, that's my goal.

Yet the last place Deron Williams wants to be when the 2008-09 NBA season begins later this month is at shooting guard for the Jazz.

"I hate playing the two," Williams said after scoring 22 points to help his White squad to a 76-76 tie with the Blue on Saturday. "I don't like playing the two. I'm a one. I like to have the ball in my hands."

Besides, the Jazz's starting point added, "We have enough two guards on this team. I don't need to play the two."

Time can change a lot of things and certainly his role and purpose in Turkey is different. I wonder what his reaction would be if the Nets were to ask him play the two some.

Here's some fantastic Friday reading on Derrick Favors. Both of these articles are from last year but are great reads.

The first is an write-up on Favors when he was a Georgia Tech where he was projected to go #2 behind John Wall (before Evan Turner jumped ahead). There was a bit of foreshadowing with this quote:

While most observers believe Wall has a pretty big lead for the top selection, it's not out of the question Favors could end up going No. 1. For instance, what if Utah, which is set at point guard with Deron Williams and holds New York's first-round pick, were to end up at No. 1?

Man, it's okay to ask for socks. I wonder if the Nets or Jazz have any similar stories where Favors wouldn't ask for more tape on his ankles or something. Humble man.

The second, a story which has been posted here before, goes over the details of Favors having never met his father and how his dad is trying to contact him. That's been over a year ago so I don't know if they've met or not.