Share All sharing options for: Marl Kalone Is Tired Of Hearing About The Lockout - The Downbeat - #591

It's always the Miltiest before the DWill - or something like that.  Yesterday's meetings between the players and owners was supposed to be the point of no return for a resolution without missing regular season games.  When the players and owners had their respective press conferences, it didn't look good.  They were still apart on  BRI split (may I never hear that term again).  They hadn't scheduled more meetings.  They cancelled the remainder of the pre-season.  And David Stern announced that regular season games would start being cancelled starting on Monday if there is no deal.

However, Ken Berger has stated all along that October 13 is the drop-dead date to get things done and still believes that the two sides are relatively close:

With nearly all of $8 billion gap closed, season can be saved - NBA - CBSSports.com Basketball
So while Hunter and Stern remained publicly entrenched in the economic positions of their most recent formal proposals -- with the players asking for 53 percent and the league offering effectively 47 -- the reality is this: the gap has closed to 2 percentage points of BRI, the difference between the midpoint of the two offers, or stated differently, the value of one Gilbert Arenas.

With each percentage point of BRI worth about $40 million, the two sides -- who were at one time $8 billion apart over 10 years -- are now a mere $80 million apart in the first year of a new deal. So you can see what the two sides saw Tuesday -- the road to a deal that, in its final form will be better than the alternative of missing a substantial portion of the regular season.

Please read his entire article.  It has some great points to back up his optimism.  If it doesn't get done, then Stern has said that the offers will get worse as the league cancels games and they start missing revenue.

Both sides have come too far to not get this done now.  At this point it's about overcoming egos and giving just a little more on each side to come to an agreement.

Good luck to Fess on his rehab.  Most NBA players that head overseas to play have or will have an NBA out.  It will be interesting to see if Fess has a desire to return to the NBA right now or he'll choose to remain the Ukraine.  There would certainly be interest from some teams in the NBA, but he may end up being able to make more in his home country than here.

@naum_23
Oleksiy NaumovKyrylo Fesenko to rehab in Dnipropetrovsk after a successful surgery. BC Dnipro still interested in signing Fes when he's healthy

1 hour ago via Twitter for iPad · powered by @socialditto

I'm in no way a good barometer of what constitutes good music.  This is even more evident when it comes to rap and hip hop.  I'm still stuck in early 90s R&B.  That  said, unlike many other players that try their hand at rap and hip hop, CJ Miles sounds really good to me.  He tweeted a couple of his tracks yesterday and I was impressed.  There are the swears (f-word and n-word) but he has talent.  Maybe he can write a beat for NBA2K13?

So I was actually creating an online NBA2K12 league last night but apparently 2K's servers were a little overwhelmed.  Stuff like that will never cease to amaze me.  It seems to happen to all companies when they launch something and they're woefully unprepared for the traffic that comes their way on opening day/night.

I didn't a chance to play with it much last night other than creating my custom wing player, Marl Kalone, a 6' 7" wing from Utah State.  I also tried the first Stockton challenge to beat the Lakers and failed miserably.

Anyway, there will be a SLC Dunk league this year and I will get it done unlike last season with 2K11.  So I've embedded a sign-up form if you're interested.  I have an XBox but we could get a PS3 league going as well.

I'm looking to just run a shortened season at first, just a 14-game season to feel things out and then make changes if we want.

Also, this game came out today for XBOX.  I'll be available late tonight if you need target practice.  ninjaeight is the gamertage (I know, I know).  With these and Gears of War 3, I've spent way to much on video games the past 2 days. I'm not supposed to buy NBA games in back to back seasons.  My previous purchase before 2K11 was 2K06. 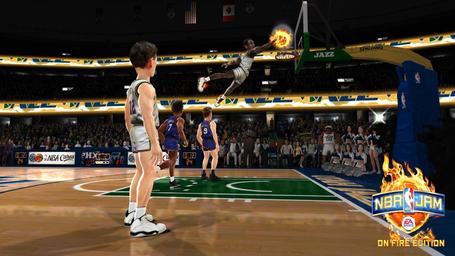 If there is no NBA season, or if regular season games are lost, ROOT sports is going to be in a world of hurt (as will all stations that broadcast NBA games).  However, there could be something in the works to satiate your Jazz lust a bit,

There's no official announcement yet, but the Jazz and ROOT are working on "bringing Jazz content to fans while the lockout continues" to fill some of the gap, said Griggs. "I don't know exactly what this is going to look like."

Officially, the Jazz are mum on the subject. But Griggs is clearly interested in it.

"I'm sure there's a lot of pent-up demand from Jazz fans," he said.

The KJZZ twitter has made a couple of statements about potentially bringing back some classic Jazz games (my idea may finally be coming to fruition).  Maybe we'll get some regardless of the lockout?  Either way, don't expect an announcement on this until after we know if we're losing regular season games.  ROOT/FSN didn't broadcast pre-season games anyway, so they're not losing anything yet.