I can't wait for next year

Share All sharing options for: I can't wait for next year

Somewhere around 18 we reach the highest point any of us ever know.

This doesn't mean life never gets better, richer, or more meaningful. Because it does. Eighteen-year-olds are incredibly shallow—and the stuff that matters isn't shallow.

But that shallowness achieves its own sort of climax. We have graduated from high school, real responsibility and independence has not yet arrived, we believe we know what life is all about, and damn it we have it ALL figured out.

My wife rolls her eyes about it every year, as she oversees yet another high school graduation (she's a high school teacher). It's one thing that goes on and on and on. 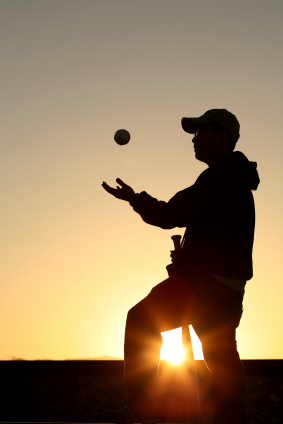 It was about that time that my buddy Jason came up to me and asked if I wanted to play on a softball team in our city rec league. All the guys were doing it, and the games would be Monday night. I said "hell, yeah," and rearranged my college schedule so I no longer had class Monday nights.

We met a few days before the season started, to get the forms filled out, figure out our team name, and—most importantly of all—debate how to spend the $200 first place prize money that was sure to be ours. Some guys were in a band and wanted to use the money for some equipment. The rest of us thought that was lame—why should OUR prize money pay for their stupid band.

A small fight ensued. Not major, but slightly heated.

What never got debated was whether we WOULD win the prize money. Of course we would win. We were 18, 19 years old. We were on top of the world. And we would be playing against a bunch of "old people," i.e., 30 and 40-somethings.

And so it went on, game after game.

Every Monday night we convinced ourselves it would be different. We switched our pre-game music. We practiced. We switched pitchers. We swapped positions.

And not only did we lose, but we lost by absurd margins. We never gave up 40 runs again, but we were the worst losers in the history of the league. Our magnificent team of 18-year-olds, the Crusaders of Righteousness, were a horrible joke. 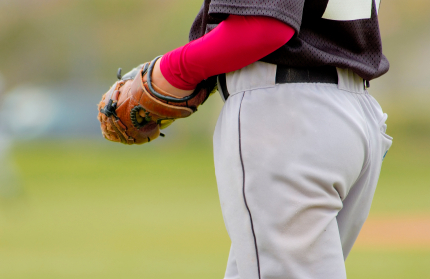 As an odd wrinkle, we were in some ways the best team. We had the best uniforms—by far. My aunt designed all uniforms for the University of Utah women's teams—softball, basketball, soccer, and of course the women's gymnastics. And she did a magnificent job on ours. They were beautiful, with the classic look of 50's major league baseball. Standing in the dugouts, throwing balls around between innings, standing in the on-deck circle with a bat propped on our shoulders, we truly looked like Musial, Mantle, and Mays. This is no exaggeration.

But when the pitching began we corrected that impression instantly.

We had a mascot. My buddy, a smart dude who realized he had no baseball experience and therefore would suck—a realization the rest of us could fathom at the time—this buddy dressed up in a gorilla costume and led cheers in the bleachers.

And ours were the best, most dedicated, and most numerous fans. We were young enough for our parents to come and support us, old enough for girlfriends and such, and at the perfect age to have 30-40 other friends who would drop by every Monday night. They cheered. They yelled at the umps. They did the wave. They brought treats—just like the classic end-of-the-soccer game oranges from our childhoods. 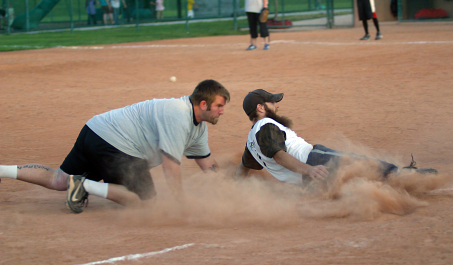 It wasn't all bad, of course. We once turned a double play. You'd have thought we just won the World Series by our reaction. In truth we had merely escaped an inning of only 2 runs. And there were good hits. I got a knack for hitting to the opposite field. We had a couple guys pull off home runs. And by the time we hit our stride after about seven games, the losses were usually about 18-9.

But every nine-run loss was still a big, humiliating loss.

Shocking though it may be, the original 40-3 humiliation was not the worst we endured. No, the worst ended with a more benign score: 24-5. But it was only that close because the other team decided after three innings to be jerks and start playing left-handed. I still get angry thinking about it, watching them sneer and laugh and mock, watching them wave their bats without coordination—all while knowing we were still unable to stop them. A guy hit a chopper to me, then playing third base. I didn't even try to throw him out. I threw at his head.

Of course, I missed. I stunk at softball. We all did.

We lost every game for three years. We kept coming back because we were sure this time would be different, that this time we'd figured out how to play the stupid game.

We were always wrong, but still we came back.

But bit by bit, by the end of our third season we had noticeably improved. The games were a lot closer, and our hope became stronger. We went winless during the regular season ... again. But we could feel something different as the double-elimination tournament neared.

The first game was close. In top of the fourth inning we scored a couple runs to close within one, 6-7. We had runners on second and third with two outs and I came up to the plate. I was a switch-hitter, and I decided to go left. You see, strange things happen when a lefty steps to the plate. The fielders all shift toward first. As if lefties pull and righties don't. On the first pitch, I deliberately pulled it foul. The fielders shifted a bit more. I pulled the next pitch foul again. Again, the fielders shifted even more. And then I smashed the next pitch down the third base line, pushing it to where the fielders had abandoned. Two runs scored, and I ended up on third with a triple.

Our team ran out to the scorers, mobbing them. Our crowd cheered like 40,000 Cardinals fans. We were up 8-7.

We had never led in any game of our three years of losing. Not once, not even for a half of an inning.

And then the up called us back. My hit had landed foul by two inches he said. No runs scored, I was back to the batter's box, and had no more fouls to give. the fielders' shift disappeared, and I grounded out to second.

But we had one more game left. And we were light-hearted, confident, and excited as that game neared. The loss from the previous game became forgotten. All we remembered was that we were in the game, that we were two inches away from actually taking the lead—and who knows how things would have been different had that ball landed fair.

And so as we took the field for the second time that day we knew something was different. We carried ourselves differently, we talked to each other differently.

And most importantly, we played differently.

We fielded cleanly, we got to the flies and the grounders. We pulled off a couple double plays. For the first time our lives, we really felt like ballplayers out in the field.

And we were even better at bat. We hit doubles and triples. We had a home run. The fences seemed twenty feet closer, the fielders seemed five steps slower, and our bats felt five pounds lighter. I had three hits in the first three innings. I drove in two runs and scored one other.

After three and a half innings we were up 14-3.

And then it happened. It was as if all the mistakes, all the gaffes, all the uncoordinated play came rushing back. We gave up a couple runs, then the first out. A couple more, and then the second out. The bases loaded, the batter hit right down the third base line—right at me. I got it and tagged the base. But no good—it had been foul. Still leading, 14-7, the hitter had been given once last shot and smashed a grand slam. 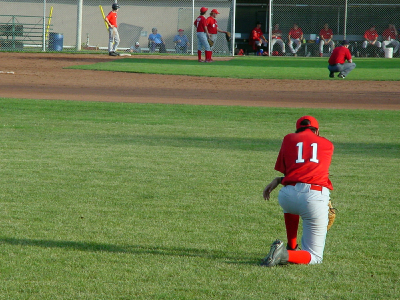 And then more runs scored.

Finally, we got out of the inning. We still had the lead, but it was now 14-13. And like the '85 Cardinals, there would be no recovery. We did not score again. With one out in the final inning the other team scored two.

We sat in the dugout in silence. Feeling like 9-year-old heart-broken kids, we honestly wept. The lights in the field turned off, and we still couldn't muster enough energy to pick up our bats and gloves and walk out.

Finally my buddy turned to me, eyes strangely bright and a grin on his face. He slapped me on the shoulder.

I do not expect the Jazz to be very good next season. I've made my thoughts clear time and time again. And right now, I half-expect to have no 2011-12 season at all. Pessimism reigns supreme.

And yet I still come to this site every day. I still check ESPN for breaking news that a new CBA has been accepted. A part of me wonders if Hayward, Favors, and Kanter can pull of one of those epic seasons and break out a couple years sooner than they ought.

I can't wait for the next season.

*We never did play another season. We had grown up. Some of us, including me, were married. Several were on their way out of state to graduate/medical/law school. We never had enough guys around with enough time to field another team. And so that 15-14 loss remains the last softball game we ever played.