Share All sharing options for: NBA And NBAPA Must Be Waiting For New Cell Phone Minutes - The Downbeat - #625

As if you needed any further proof that 95% of this lockout is ego-driven, it was reported yesterday that both sides are just waiting for the other side to pick up the phone and call the other. Nobody wants to make the first move. Nobody wants to appear to be weak and give in.

What a joke. Right now, neither side cares about the season, the fans, and the thousands of employees that will be affected by the lost season. If that were so, someone would have swallowed their pride and picked up the phone, and get talking again. What exactly does either side have going on right now that takes priority over getting a deal done?

That's what this whole thing has been about from the beginning though. They see each other as necessary evils and don't want to be considered the losers of this whole process. On one side you have high-powered businessmen and on the other, ultra-competitive athletes. Who's going to cave first? That's what each side wants the other to do.

I tweeted last night that we're going to have to come up with some romantic comedy-type hijinks and trick both sides to meeting. Some other suggested a Parent Trap-type setup. Whatever works. Some operative needs to kidnap both and get them in the same room. Even then, you'd have to make one of them talk first. Might I suggest Cousin Eddie style kidnapping of both high-level execs and taking them to a family that's not going to have a Christmas this year because mom or dad isn't working because of the lockout? (Please do not kidnap these people or any people) Maybe a Christmas Carol fits as well?

Neither side is going to change. Lead attorney David Boeis stated that he might pick up the phone on Wednesday. To that I reply, what the hell are you doing today?

An AK update. He has a broken nose and an injured shoulder from his fall. It's being reported now that he'll be out up to a month. His agent though reported some conflicting information,

I talked to him about 45 minutes after it happened. He told me he did not suffer a concussion. He said he broke his nose and had some bruises. ... He said to me he was feeling fine the next day and they'd given him a nose job later that day. He said that hurt a little bit, but he expected that he probably would not miss any games. ... I don't know how many days they'll tell him that he has to protect the nose. He's playing his butt off. He's really playing good.

That has agent speak all over it. "Nothing to see here folks! Minor injury. He'll be back in no time." I hope AK takes the time off that he needs.

Matt Harpring joining twitter could be the best thing that's ever happened. He's gone to town on the players for not accepting the latest offer. He's having twitter fights with David Locke. He's having an excellent back and forth with Tom Ziller.

My only question is why he's not currently under bigger gag order. He's an employee of the Jazz and of the NBA. He's not communicating with players directly, but I can't imagine they want employees saying the stuff he's saying. However, he is admonishing the players to accept the deal, so maybe they don't care.

If you have a kid in the Jr. Jazz age-range, then maybe you want to enroll them in Jerry Sloan's Holiday Classic? 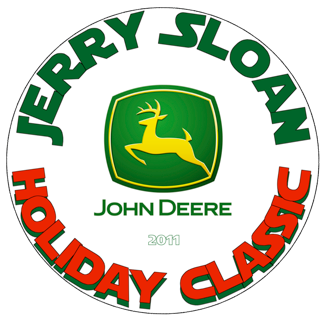 You get a guaranteed three games, a t-shirt, and winners get John Deere tractor trophies. How can you beat that?

Tuesday open poll... What have you been doing with your free time with no NBA?