Share All sharing options for: The Best Part About The Lockout Being Over Is That We Don't Have to Talk About the Lockout -The Downbeat - #530

Sssssssnnnnnnnnnniiiiiifffffffff.  Do you smell that?  The lockout's body isn't even cold yet and already trade rumors and availability are flying.  These things have laid dormant all summer and into fall but now that things are cooking again, teams can't wait to start leaking things to the press and getting things going again.

Exhibit 1: The Indiana Pacers have called on the availability of Paul Millsap.  According to the Indy Star, the Pacers were interested in Millsap before the draft.  It's interesting to note that Indiana had the 15th pick in the draft this year and ended up trading the pick (Kawhi Leonard) to San Antonio for George Hill and two other picks.

Brian T. Smith points out that the director of player personnel for the Pacers is none other than Kevin Pritchard, formerly of the Blazers who tried to steal Millsap away when he became a restricted FA.

We tend to value our own players more than others.  In this case though, value is what describes Paul Millsap to a tee.  Without a front-loaded offer like he got from the Blazers -- and eventually the Jazz when he matched -- what does Millsap go for on the open market in two seasons when he's an unrestricted FA?  His closest comparison right now is David West.  West is about to get paid a ton of money when free agency kicks off on the 9th.

Millsap has been more durable and is five years younger than West.  The question may be, can the Jazz afford to keep Millsap in two years?  One thing that will be helpful to the Jazz is that they will be able to offer Millsap more money and they will have Al Jefferson's deal off the books -- if he's still here.  The only players that will have contracts for sure with the Jazz in 2013 are Derrick Favors, Gordon Hayward, Alec Burks, and Enes Kanter.  Jeremy Evans is another possibility.

If the Jazz want Millsap back, it can be done.  But if he's not going to be their cornerstone player, will he be worth paying that much?  Whatever West gets will set the barometer for Millsap deal.  Even though Millsap has improved every season since he's entered the league and will continue to get better, his trade value may never he higher.  He'll be paid $8.1 and $8.6 million over the next two season (with a prorated amount this year).

If Millsap is traded, it's going to come at a bit of a premium considering his current deal and his production.  What kind of player or picks or combination of both can the Jazz command?  The Pacers aren't going to be terrible enough to get a high lottery pick.  Would the Jazz want a player in Darren Collison to be their point guard of the future? Would they go after a previous target in Roy Hibbert?

Indiana won't be the only team with calls in to Kevin O'Connor in regards to Millsap.  It would be terrible to see Millsap go but depending on the return package, the Jazz might never get more for him.  I'm still numb from Sloan stepping down and Deron Williams being traded.  I don't think trading Millsap would phase me now.

Man, it's great to be talking about this stuff again instead of BRI and whatever other boring terms have been tossed around lately.

Round two from Chris Broussard (at the end),

If they're shopping both, they're not looking to deal both.  The team will try to get the best package they can for one of them.  If one goes, the other stays.  There's no way the Jazz turn over the entire team to Kanter and Favors this season.  You would have Mehmet Okur as the backup.  Barring getting back a big man in return in a trade, suddenly the team would go from a logjam to dangerously thin.

I'm not going to be surprised either way this season.  The Jazz could elect to stay with the players they have for the entire year or they could make 2-3 deals the first week that free agency is open and turnover 1/3 of the roster.  neither would surprise me.  But at some point, they're going to have to start stabilizing things.  Do they rip the bandaid off now and start the healing earlier or do they ride things out for another season?

While Favors and Kanter have a ton of talent and upside, it would be an huge gamble to give them the keys this season without a proven veteran behind them.  I've played as many minutes in the NBA as Kanter has.

If you can make out what's going on with Andrei Kirilenko, can you explain it to me?  Does he have a concussion, broken nose,  injured shoulder, or all of the above?  Will he be back in 7-10 days or will he be out until January?  Does he want to play in Utah, LA, Orlando, NJ, or Russia?

This is turning into a Russian/NBA version of Clue.

According to Howard Beck of the New York Times, teams will play two pre-season games against the same team with a home and home.  Geographic pairings are likely.

That means the Jazz will likely play Denver, Phoenix, or Portland.  If you take a look at this map, I'm guessing the Jazz get paired with Portland.  Golden State will go up against Sacramento.  The two LA teams will play each other in a home and "away" game.  Phoenix and Denver would go together.  Utah is the closest left to Portland.

If the league's doors open on the 9th, I'm guessing the first pre-season game will be the 16th and the next one maybe on the 21st?  That means we're just a week and a half from training camp getting under way and another week after that until the first official game thread of the season.

Still the idea of pairing up with someone takes me back to the anxiety of middle school and high school where you're either asked to pair off with someone or get assigned to someone.  The LAs are brothers and live under  the same house, so they pair up.  Denver and Phoenix conspire against you and team up.  Golden State and Sacramento have been going steady since 5th grade.  Portland ignores the teacher's edict about pairing up and joins Sacramento and Golden State.  OKC is the jock that doesn't join a group either and instead just tours around the country playing.  And now we're stuck with the nose-picker.  This is where Socially Awkward Penguin comes in, 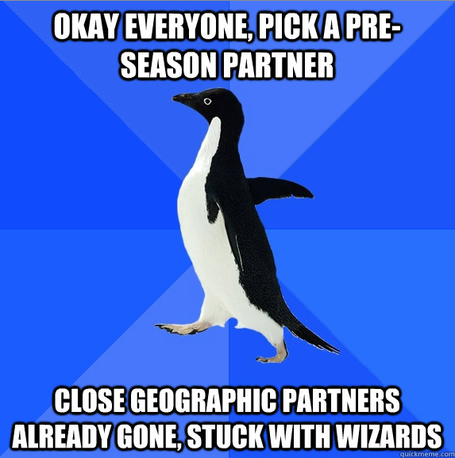 Brian T. Smith reported that the Jazz are indeed looking for a big-man coach.  Let's take Karl Malone's name out the discussion for a moment.  That's not because he can't do it or wouldn't do it, but he's said that he didn't want to be involved with the Jazz in that manner until his kids are out of the house.  He also stated that he'd prefer to do something more in the front office.  Then you have the Jazz organization who doesn't appear to be comfortable with Malone in the building let alone letting him run some things.  He may also be too big of a personality for Tyrone Corbin and could overshadow things.  That's not to say that Malone would do that intentionally or that Corbin couldn't control things, but it might be a bit of a distraction should the media be wanting to do more interviews and get more input from Malone on things than with Corbin.

Malone would be the story and neither he nor Corbin nor the organization want that.  So let's put aside Malone for a bit.  Who else would you want the Jazz to bring in as a development coach?