Some real, real signs that the NBA is back. CJ Miles tweeted this pic after he landed in SLC, 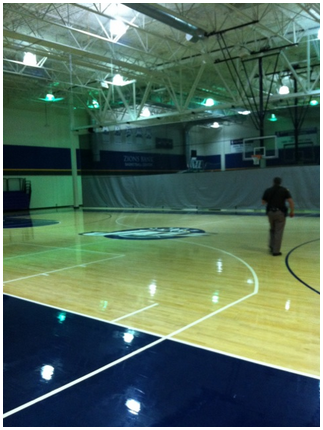 That's an NBA player next to an official NBA logo. Training facilities are open according to Marc Spears of Yahoo! and Howard Beck added this,

Players will be allowed to use team facilities and to work with team trainers on "voluntary conditioning or strength training," according to the league. However, the trainers cannot supervise "basketball-related activity," nor can coaches and players interact.

The league will also allow teams to start talking to agents in preparation for trades and signings that start on December 9. Just nine more days. The full schedule is set to be released this Friday.

If you don't like the offseason rumor trade/free agency mill, you might want to stay off the Internet for the next few weeks because it's about to get crazy.

I hope you didn't have anything to do on Christmas Day. According to the same New York Times article, the league will kick off the season with not three games, but five games starting at noon eastern time. The three original Christmas games will remain intact.

I would be shocked if the Thunder and Clippers weren't on that schedule in some form. They probably won't play each other. What I can tell you for sure is that one of the teams won't be the Jazz given that A, we're still in Utah, and B, the Jazz don't often play on Sunday.

Gordon Hayward with a PSA on how to handle those back to back to backs that will be coming up this season,

"It's going to be difficult, especially considering how long NBA games are, how intense they get," Hayward said. "But it's our job, so we're just going to have to be ready for it, take it game by game, make sure we drink a lot of fluids."

Perhaps he could hire his own professional water boy?

Okay, it's a little ridiculous that Besiktas retired Deron's jersey after playing just 15 games, but this was pretty cool,

And is that Mariah Carey's My All laying in the background? Really? Don't get me wrong, I love me some MC, but really?

No word on whether Deron was crowned king of Turkey in that ceremony.

DWill is really a winner in the lockout. He made his move early, had a wonderful experience overseas, and will return to the league already in playing shape and ready to go. The Nets should send Besiktas some cash.

A fantastic highlight video of John Stockton based around his Hall of Fame speech. You might want to close the windows so that dust can't get in.