Share All sharing options for: Free Jeremy Evans - The Downbeat - #615

This is what you're missing folks, 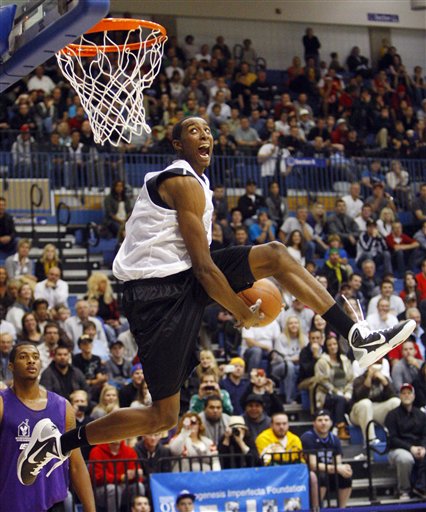 The owners and players could be meeting today according to Adrian Wojnarowski before tomorrow's doom-day deadline. The NBAPA has also called all 30 team reps to New York today.

I have a ton of videos from last night sitting under the basket. Here are some from warmups. I'll upload the rest including some Evans throwdowns. I'll get mine up, but moni has a great recap.

Nobody is hoping for a cancelled season. However, if it does, the Warriors' draft pick that the Jazz have coming would be nice. According to Ric Bucher, the lottery would be based off the last three seasons' wins and then a lottery for the worst 14. Steve Perrin at ClippersNation ran the numbers and listed the results. The top 14:

That would give the Jazz the #7 pick in the draft unless they were to move up or be pushed down because of the lottery. With all of the players that returned to school for this season plus the new crop, this could be a deep draft. The regular pick for the Jazz wouldn't come until #19 based on that formula.

There's a good chance however that the pick ends up being good if there is a season.

Update: I was reminded that the GS pick is top-7 protected. So we would need a couple of teams below to win lotto to bump it down. It would be more likely to get that pick if the season is played and GS finishes 8th or 9th. There's not a likely chance that two teams would jump.

Memo is doing well overseas. In four games, he's putting up 10 & 8 while leading the team in rebounds. His shooting percentages are low at just 45% overall and 25% from three.

If he keeps this level of play up or improves, are you still in favor of using the amnesty clause on him?