Depends On What Your Definition Of Deal Is - The Downbeat - #616

Share All sharing options for: Depends On What Your Definition Of Deal Is - The Downbeat - #616

Derek Fisher and 43 other players held a press conference yesterday (with a Bill Clinton cameo) after their mandatory meeting in which they announced that they would not accept the owners' latest offer.  However, if you're looking for a glimmer of hope for the season to still be salvaged, Fisher said that if the owners would negotiate on the system issues, the 50-50 split may be acceptable.  Those system issues that are important to the players are the MLE changes and sign and trades for luxury tax teams.

If that's the case, this is really in the owners' court to get this deal done.  They have the BRI split that they want which would save them over $300 million a year -- their reported losses.  The owners have their victory.  If the season is lost because they can't hammer out these last details, it's on them.  Adrian Wojnarowski is reporting that Stern could tweak the system issues today.  Stern also said they will get a deal done.  Of course he didn't say when or what that deal would look like for sure.

Chris Broussard of ESPN is reporting that the owners and players will be meeting at 1 p.m. eastern today.  If the 5 p.m. league imposed deadline is real, that's cutting things awfully close.  If they don't make it work, expect the players to vote to decertify with the actual decertification vote taking place in December.

Patrick Hayes, PistonPowered: Alec Burks. Burks' shooting needs work, but his size for a guard, ability to get to the rim and finish will give the Utah Jazz the weapon at the shooting guard spot they've long coveted to complement Deron Williams. Oh, right. Devin Harris should like him, too.

John Krolik, Cavs: The Blog: Enes Kanter. I think Kanter will have a rookie season a lot like DeMarcus Cousins' -- he's going to have a few huge games, he's going to show flashes of extreme skill for his size, and he's going to put up good raw numbers, but his defense and scoring efficiency are going to be question marks. Five years down the line, I might like Biyombo more than Kanter, but I'm having a hard time picturing what Kanter looks like on a good team.

Hayes Davenport, CelticsHub: Enes Kanter. The first phone call made after the lockout lifts will likely involve an Al Jefferson trade, paving the way for Kanter to start at center for the Jazz. He's a big improvement from Jefferson as a defender, with a vast skill set to make up most of Jefferson's lost production on offense.

Zach Harper, Daily Dime Live: Derrick Favors. Favors got lost in the shuffle of trying to figure out what was wrong with Brook Lopez's rebounding and trying to get Deron Williams out of Utah. But once Favors settled into the Jazz's new world, he started to blossom a bit. There is a logjam in the frontcourt, but his size and athleticism should give him plenty of chances to earn minutes.

Eddy Rivera, Magic Basketball: Derrick Favors. If there were a dart board representing Favors' potential, there's no telling where that dart would land. That speaks more to Favors' immense ceiling as a player than anything else. But if Favors' numbers after being traded to the Jazz in the Deron Williams deal are any indication, he's well on his way to becoming an impact player in the NBA.

If that's how things play out, you can't help but be excited for this season.  I expect to have two rookies and two sophomores playing in the rookie sophomore game this season.

I hate using the disclaimer of it being an exhibition game, but man, my expectations for Alec Burks this season went irrationally through the roof after watching him play.

This photo of Jeremy Evans finishing a 360 dunk blows my mind.  He's coming down! Excellent photos from Kris Chatelain. 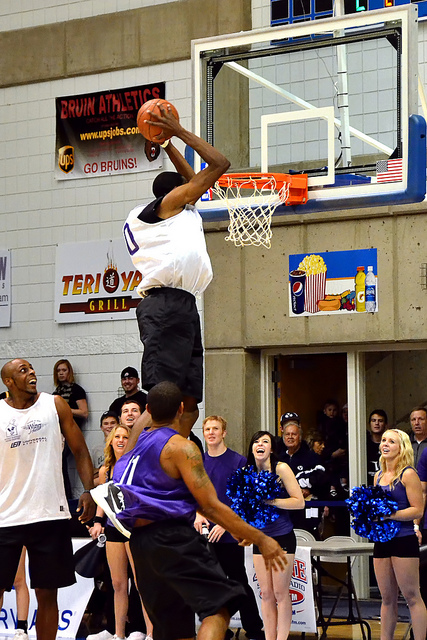 Trying not to be a homer here, but he's gotta be in the slam dunk contest this season.

Former Jazz man Jose Ortiz is back in federal prison after having his bail denied for testing positive for cocaine.  From the Washington Post (AP),

Ortiz pleaded guilty last week to drug charges after federal agents raided his home in June and seized 218 marijuana plants at his house along with 40 rounds of ammunition.

Ortiz had been freed on bail while awaiting sentencing.

End the lockout already!  Do you see what it's doing? Oh wait...

The one year anniversary of Millsap's Miracle in Miami,