Once the whistles stopped blowing and the teams started playing, it was a fun game to watch. There was a lot better effort from the Jazz this time around, especially from the starters. Speaking of which, the Jazz made a couple of changes to the starting lineup which may have been the difference. Gordon Hayward and Derrick Favors got the nod ahead of CJ Miles and Mehmet Okur.

Overall, the Jazz played much better this time around but given their first pre-season game, there wasn't much they couldn't improve upon. Their defensive rotations were better, rebounding continued to be a strong point, and an early nine-point deficit wasn't a permanent grave.

It seems as though Tyrone Corbin may have decided on his starters and rotations. I was a bit surprised to see most of the starters with ice on their knees for the entire fourth quarter. On the other side, Nate McMillan elected to keep all of his starters in and made a push at the end of the game to win with trapping and even subbing in Gerald Wallace with just under two minutes to play. The Jazz held off a furious self-inflicted rally to come away with the win over the Blazers.

Player observations after the jump.

Overall, a good bounce-back game at home. It was good to see the second and third stringers in against the Blazers starters to get some experience in a meaningless game (did anyone tell that to McMillan?). They didn't handle it the best but were still able to make the W stick.
Of course the story of the night was the annhilation of Gerald Wallace by Jeremy Evans. It should be no surprise that the dunk of the year was called off by a foul call. There are two rules at play here. One, and the reason for the offensive foul call, is this one,

An offensive foul should never be called if the contact is with a secondary defensive player who has established a defensive position within a designated "restricted area" near the basket for the purpose of drawing an offensive foul.

On replays, Wallace was outside of the restricted area. However, you also have this rule,

A defensive player is not permitted to move into the path of an offensive play-er once he has started his shooting motion.

From this still, you can see that Evans is going to into his shooting motion here, 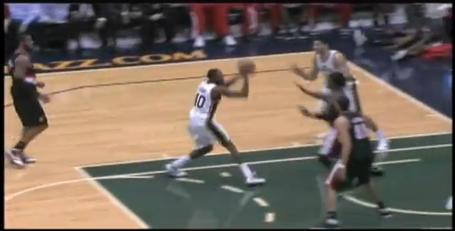 Wallace is still in the restricted area and begins to move into place to take the charge. Evans is at the point of no return here. There's no way for him to stop. 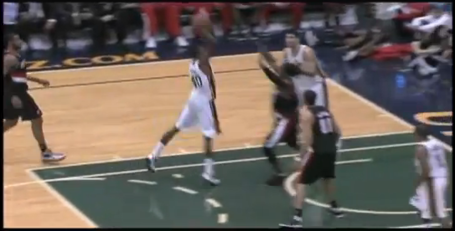 Wallace's back foot is still in the restricted area and isn't set while Evans is clearly in his shooting motion. 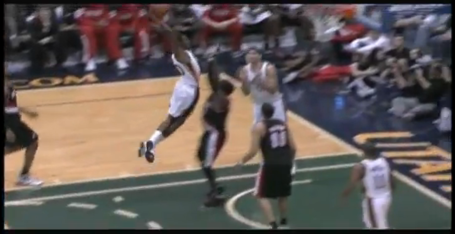 Wallace barely gets set here as Evans is completely airborne.

I don't know how you call this in real-time. There have been plenty of dunks similar to this that don't get called for fouls either way. Sometimes Evans gets called for fouls simply because he's tall or he jumps over everyone. He's a hard guy to call unless you're familiar with his style of play.

Here's the full thing in real-time along with a hi-res photo of the dunk.

We start for realsies a week from today.