Share All sharing options for: Jeremy Evans. That Is All - The Downbeat - #647 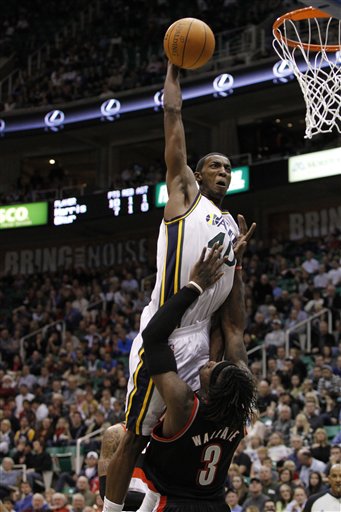 Just in case you hadn't seen this angle of the dunk last night. The only bad thing is that now there's photographic evidence that implicates Jeremy Evans for attempted homicide.

Evans won't make the hall of fame, but this needs to be made into a statue. He's an artist, maybe he can make it himself. I would also purchase small replicas of that statue. So if anyone from Fanzz or McFarlane is reading, get on that.

I try not to get offended at power rankings and whatnot, but are the Jazz really below the Rockets, Suns, Nets, and Cavaliers in watchability? Mike Prada explains,

22. Utah Jazz: To continue with weird food analogies, the Jazz are this year's mystery meat. They're still a team in transition, as evidenced by the fact that three of their four highest players play the same positions as the No. 2 pick in the 2010 NBA Draft and the No. 3 pick in the 2011 draft. You figure they won't end the season with the same roster as they began it, so cohesion will be an issue. Still, they're always a pretty good bet to give you a couple random Monday afternoon classics on their home court, which is one of the loudest in the league.

After last night, Jeremy Evans is going to be put on league pass alert. Derrick Favors will be a big draw as the season goes on. Trying to put my fandom aside, they would definitely move up several spots.

I still have yet to read or hear anything on how his rehab is going. He's got to be close to ready to go.

Speaking of another former Jazz man that hasn't been in a rush to sign with an NBA team, AK shows why maybe he's not in a hurry to leave the Motherland. He's a national hero and star there. (h/t Kurt Adison)