If this game felt familiar, it's because it was awfully similar to this game last year against the Nuggets.  It was on February 6, the final score of that game was 116-106, and Deron dished out some payback on Joey Graham after he had fouled Ronnie Brewer flagrantly.

Fast forward one year later and we have a final score of 113-106 and Deron going after JR Smith for having flagrantly fouling Raja Bell.  The win last season was the team's 8th in a row.  Later this season we might be looking back at this victory as a turning point for the team.  Deron went after Smith, hitting him in the back with his forearm.  Smith was ejected for the flagrant 1 and Deron received a technical.  If that's what gets this team going again, that's a small price to pay.  Maybe we should even give Smith a co-MVP of sorts is that's the case.

This was the beset game of the year for me.  That's not taking anything away from the miraculous comebacks in the November.  Look at what this game gave us:

There were a few times in the first half where it looked like the Nuggets could start to pull away.  However, their biggest lead at any point in the game was only four points.  Whether the Nuggets were trying to run away with the game or get back in the game, the Jazz had an answer each time.  We saw something happen that we almost never see and that was a timeout called by Sloan in the third when it appeared that the Nuggets were going to catch fire.
They had just gone up 66-62 when Sloan called the TO.  Out of the timeout, Raja missed a three-pointer but was the recipient of the next two passes from Deron on the break to tie it up.  The first was a beautiful bounce pass from half-court between two defenders to a streaking Bell for a layup on the left side.
After Denver tied it up, a pressing Deron was able to put some English on the ball for a layup off the backboard and then find CJ for a three.  That was a lead they wouldn't give up.  They had two 5-0 runs thrown at them by the Nuggets, but some clutch shots and D from Al Jefferson clinched it.  Al's most impressive shot was a turnaround baseline shot from the left side that found nothing but net.  I don't recall Al breaking out that shot all year.  If here's got a turnaround jumper, that's scary.
Melo did his best to bring the team back.  After he had made another of his 1,800 FTs, the Jazz were up three.  Deron then had a drive and kick that went to nobody wearing Navy .  Instead, the Nuggets had the ball and a chance to tie it at 107.  Normal Jazz-killer Arron Afflalo makes that last shot, instead his attempt caromed off the side of the rim and into Raja's hands.
This was the tempo and spark that we've seen the past few games.  Throw Deron back out there and we start seeing some major improvement.
Enjoy this one and let it soak in.  The season series is now tied 1-1 with both of the games in Denver.  So the Jazz will hold a tiebreaker for now.  Let's wrap this series up.
Player notes and other thoughts after the jump 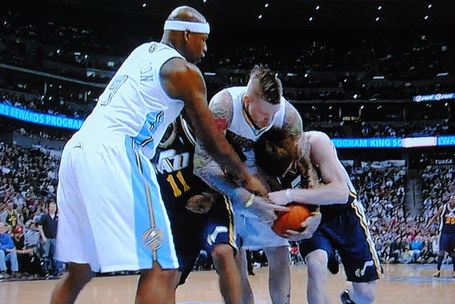 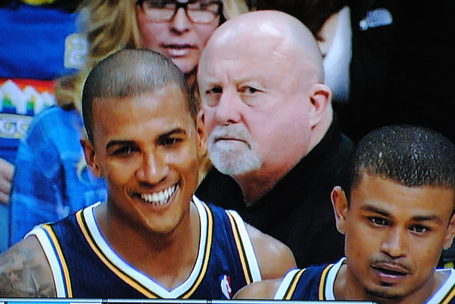 The Thunder head to town tomorrow night.  I'll be at the game, hopefully with some good tweets.  The second best double-flop gif heads your way in the morning.